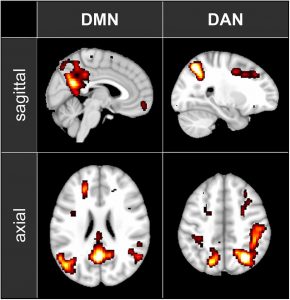 “While scientists do not yet fully understand the true origin of consciousness, many agree that it can be measured within the brainwave patterns of the individual.” – EOC Institute

In meditation there occurs a number of different states of consciousness. One of the highest levels achieved is content free awareness. In this state there is nothing that the meditator is aware of other than awareness. The meditator is aware and aware of being aware, but nothing else. Changes in awareness are associated with changes in the activity of the brain which can be seen in the Electroencephalogram (EEG) and also in functional Magnetic Resonance Imaging (fMRI). But content free awareness is elusive and what activity in the brain accompanies it is unknown.

In today’s Research News article “Content-Free Awareness: EEG-fcMRI Correlates of Consciousness as Such in an Expert Meditator.” (See summary below or view the full text of the study at: https://www.frontiersin.org/articles/10.3389/fpsyg.2019.03064/full?utm_source=F-AAE&utm_medium=EMLF&utm_campaign=MRK_1254058_69_Psycho_20200225_arts_A), Winter and colleagues recruited an meditator with 40 years of experience and over 50,000 hours of formal meditation practice. They simultaneously recorded heart rate, respiration, and brain activity with an electroencephalogram (EEG) and functional Magnetic Resonance Imaging (fMRI) during rest, attention to external stimuli, attention to internal stimuli including memories, and during meditation in a state of content-minimized awareness. After the content free awareness “he reported that he had no awareness of any mental content or any sensory event, including the noise of the MRI scanner. Similarly, he reported having had no experience of self, time, or space of any kind whatsoever at this stage.”

These are interesting results but it must be kept in mind that this was from a single adept expert meditator. Nevertheless, they provide a glimpse at the state of the nervous system during the deepest mental state occurring during meditation. The default mode network is involved in mind wandering, daydreaming, and self-referential thought. The fact that the connectivity within this system was markedly reduced during content free awareness suggests that non-specific mental activity and the idea of self are greatly reduced if not eliminated. The fact that connectivity within the dorsal attentional network increased while there was no increase in the sensory areas of the brain suggests that during content free awareness there was a focused attention that was decoupled from sensory experience. Hence, the brain activity observed in this meditator markedly corresponds to the mental state achieved.

“The higher state of consciousness is somewhere in between the waking, sleeping and dreaming states. Here, we know we “are” but we don’t know “where” we are. This knowledge that I “am,” but I don’t know “where” I am or “what” I am, is called Shiva.” – Ravi Shankar

The minimal neural correlate of the conscious state, regardless of the neural activity correlated with the ever-changing contents of experience, has still not been identified. Different attempts have been made, mainly by comparing the normal waking state to seemingly unconscious states, such as deep sleep or general anesthesia. A more direct approach would be the neuroscientific investigation of conscious states that are experienced as free of any specific phenomenal content. Here we present serendipitous data on content-free awareness (CFA) during an EEG-fMRI assessment reported by an extraordinarily qualified meditator with over 50,000 h of practice. We focused on two specific cortical networks related to external and internal awareness, i.e., the dorsal attention network (DAN) and the default mode network (DMN), to explore the neural correlates of this experience. The combination of high-resolution EEG and ultrafast fMRI enabled us to analyze the dynamic aspects of fMRI connectivity informed by EEG power analysis. The neural correlates of CFA were characterized by a sharp decrease in alpha power and an increase in theta power as well as increases in functional connectivity in the DAN and decreases in the posterior DMN. We interpret these findings as correlates of a top-down-initiated attentional state excluding external sensory stimuli and internal mentation from conscious experience. We conclude that the investigation of states of CFA could provide valuable input for new methodological and conceptual approaches in the search for the minimal neural correlate of consciousness.