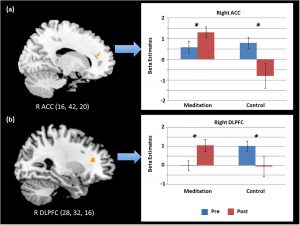 There has accumulated a large amount of research demonstrating that mindfulness has significant benefits for psychological, physical, and spiritual wellbeing. It even improves high level thinking known as executive function and emotion regulation and compassion. One of the primary effects of mindfulness training is an improvement in the ability to pay attention to the task at hand and ignore interfering stimuli. This is an important consequence of mindfulness training and produces improvements in thinking, reasoning, and creativity. The importance of heightened attentional ability to the individual’s ability to navigate the demands of complex modern life cannot be overstated. It helps in school, at work, in relationships, or simply driving a car. As important as attention is, it’s surprising that little is known about the mechanisms by which mindfulness improves attention.

There is evidence that mindfulness training improves attention by altering the brain. It appears That mindfulness training increases the size, connectivity, and activity of areas of the brain that are involved in paying attention. In today’s Research News article “Enhanced Attentional Network by Short-Term Intensive Meditation.” (See summary below or view the full text of the study at: https://www.frontiersin.org/articles/10.3389/fpsyg.2019.03073/full?utm_source=F-AAE&utm_medium=EMLF&utm_campaign=MRK_1245141_69_Psycho_20200213_arts_A), Kwak and colleagues recruited healthy meditation naïve adults and randomly assigned them to a 4 -day 3-night structured residential retreat of either meditation practice (19 hours total practice) or relaxation.

Before and after the retreat the participants underwent functional Magnetic Resonance Imaging (fMRI) of their brains. While they were in the scanner attention was measured with an attention network task. This included a flanker task and a temporal and spatial cueing task. These tasks measure 3 attentional processes, alerting, orienting, and executive control.

So, enhance attention and attentional brain systems with meditation.

“With more distractions at your fingertips than ever before, focused attention has become “an endangered species.” Luckily, . . . as little as 10 minutes of meditation a day can help turn the tide, and these benefits can be observed from the moment a person begins their practice.” – Nicole Bayes-Fleming

While recent studies have suggested behavioral effects of short-term meditation on the executive attentional functions, functional changes in the neural correlates of attentional networks after short-term meditation have been unspecified. Here, we conducted a randomized control trial to investigate the effects of a 4-day intensive meditation on the neural correlates of three attentional functions: alerting, orienting, and executive attention. Twenty-three participants in meditation practice and 14 participants in a relaxation retreat group performed attention network test (ANT) during functional magnetic resonance imaging both before and immediately after intervention. The meditation group showed significantly improved behavioral performance in the executive control network in ANT after the intervention. Moreover, neural activities in the executive control network, namely, the anterior cingulate cortex (ACC) and dorsolateral prefrontal cortex (DLPFC), were also significantly increased during the ANT after meditation. Interestingly, neural activity in the right ACC was significantly predicted by behavioral conflict levels in each individual in the meditation group, indicating significant effects of the program on the executive control network. Moreover, brain regions associated with the alerting and orienting networks also showed enhanced activity during the ANT after the meditation. Our study provides novel evidence on the enhancement of the attentional networks at the neural level via short-term meditation. We also suggest that short-term meditation may be beneficial to individuals at high risk of cognitive deficits by improving neural mechanisms of attention.