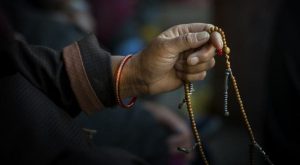 “all black religious expression has most of the following attributes: It is animistic, or spirit-filled; anthropocentric, or human-centered; dynamic; expressionistic; shamanistic (believing in communicating with spirits); and thaumaturgic (belief in miracle working).” – Diana Hayes

The immune system is designed to protect the body from threats like stress, infection, injury, and toxic chemicals. One of its tools is the Inflammatory response. This response works quite well for short-term infections and injuries. But when inflammation is protracted and becomes chronic, it can itself become a threat to health. It can produce autoimmune diseases such as colitis, Chron’s disease, arthritis, heart disease, increased cancer risk, lung disease, sleep disruption, gum disease, decreased bone health, psoriasis, and depression. Needless to say, chronic inflammation can create major health problems. Indeed, the presence of chronic inflammation is associated with reduced longevity. So, it is important for health to control the inflammatory response, allowing it to do its job in fighting off infection but reducing its activity when no external threat is apparent.

Depression is linked with increase inflammatory responses. Mind-body techniques such as yoga, Tai Chi and meditation have been shown to adaptively reduce the inflammatory response.  In addition, spirituality has been shown to be associated with reduced depression. African Americans have significantly greater incidences of disease. So, it is reasonable to investigate the relationships of spirituality, depression, inflammation and health in African Americans.

In today’s Research News article “Influence of Spirituality on Depression-Induced Inflammation and Executive Functioning in a Community Sample of African Americans.” (See summary below or view the full text of the study at: https://www.ncbi.nlm.nih.gov/pmc/articles/PMC6478044/), Herren and colleagues recruited healthy adult African Americans and measured them for depression, daily spiritual experiences, cognitive ability, and response inhibition. Blood was drawn and measured for inflammatory cytokines; IL-1a, TNF-a and IL-6.

These findings are interesting but they are correlational and causation cannot be determined. But they suggest that spirituality is associated with better physical and psychological health in African Americans. It is associated with lower depression levels and better cognitive performance. Additionally, it was associated with a lessened negative relationship between the inflammatory response and cognitive ability.

African Americans are generally more religious and spiritual than other groups. The present findings may help to explain why. Their spirituality is associated with better mental and physical health and cognitive ability. It remains for future research to determine if these relationships are causal and spirituality produces these benefits. It also remains to be seen if these relationships are present in other ethnic and racial groups.

Spirituality is associated with better mental and physical health and cognitive ability in African Americans.

African Americans (AAs) are disproportionately affected by cerebrovascular pathology and more likely to suffer from premature cognitive decline. Depression is a risk factor for poorer cognitive functioning, and research is needed to identify factors that serve to mitigate its negative effects. Studies have demonstrated positive influences of spirituality within the AA community. Determining whether spirituality attenuates the effects of depressive symptoms on cognitive functioning and the pathophysiological mechanisms that explain these relationships in AAs is paramount. This study examines the influence of daily spiritual experiences on the relationship between depressive symptoms and cognitive functioning, and how inflammatory markers may partially explain these associations. A sample of 212 (mean age= 45.6) participants completed the Daily Spiritual Experience Scale (DSES), Beck Depression Inventory-II (BDI-II), Trail Making Test A and B (TMT) and Stroop Color and Word Test (Stroop). Blood samples were collected to measure inflammatory mediators (IL-6, IL-1a, TNF-a). Linear regression analyses were used to evaluate associations. Higher BDI-II scores were associated with poorer psychomotor speed and visual scanning, measured by TMT A (B=1.49, P=.01). IL-6 explained a significant amount of variance in this relationship (B=.24, CI 95% [.00, .64]). IL-6 also significantly mediated the relationship between depressive symptoms and psychomotor speed and mental flexibility, measured by TMT B performance (B=.03, CI 95% [.003, .095]). Frequent spiritual experiences among AAs may ameliorate the negative influence of depressive symptoms on cognitive functioning.