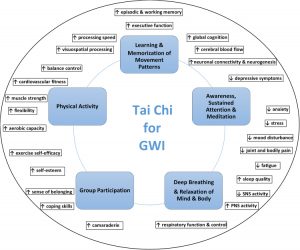 Engaging in warfare has many consequences to society and individuals, including the warriors themselves. Post-Traumatic Stress Disorder (PTSD) is a common problem among military veterans with between 11% to 20% of veterans who were involved in combat developing PTSD. There is a specific syndrome that has been identified in about 36% of veterans of the Persian Gulf war of 1991. The cluster of symptoms include fatigue, headaches, joint pain, indigestion, insomnia, dizziness, respiratory disorders, and memory problems.

It has been demonstrated that mindfulness training is effective for PTSD symptoms . In addition, Yoga practice is a mindfulness practice that has been shown to be helpful for PTSD. Mindful movement practices such as Tai Chi and Qigong have been found to be beneficial for individuals with a myriad of physical and psychological problems. This raises the possibility that Tai Chi practice may be beneficial for veterans suffering from Gulf War Illness.

In today’s Research News article “The Effects of Tai Chi Mind-Body Approach on the Mechanisms of Gulf War Illness: an Umbrella Review.” (See summary below or view the full text of the study at: https://www.ncbi.nlm.nih.gov/pmc/articles/PMC6600798/), Reid and colleagues review and summarize the published research studies of the effectiveness of Tai Chi practice in relieving the symptoms of participants whose symptoms were similar to Gulf War Illness. They identified multiple randomized controlled trials and meta-analyses of Tai Chi practice for these symptoms.

They report that the published research indicates that Tai Chi practice significantly improves mood, sleep, global cognitive function, and respiratory function and significantly decreases insomnia, anxiety, depression, stress, and chronic pain. Hence Tai Chi practice has been shown to be effective in relieving symptoms that commonly occur in Gulf War Illness. This suggests that Tai Chi practice should be tried directly to treat veterans with Gulf War Syndrome. It remains for future research to test this hypothesis.

So, improve Gulf War Illness in veterans with Tai Chi.

Gulf War illness (GWI) is a chronic and multisymptom disorder affecting military veterans deployed to the 1991 Persian Gulf War. It is characterized by a range of acute and chronic symptoms, including but not limited to, fatigue, sleep disturbances, psychological problems, cognitive deficits, widespread pain, and respiratory and gastrointestinal difficulties. The prevalence of many of these chronic symptoms affecting Gulf War veterans occur at markedly elevated rates compared to nondeployed contemporary veterans. To date, no effective treatments for GWI have been identified. The overarching goal of this umbrella review was to critically evaluate the evidence for the potential of Tai Chi mind-body exercise to benefit and alleviate GWI symptomology. Based on the most prevalent GWI chronic symptoms and case definitions established by the Centers for Disease Control and Prevention and the Kansas Gulf War Veterans Health Initiative Program, we reviewed and summarized the evidence from 7 published systematic reviews and meta-analyses. Our findings suggest that Tai Chi may have the potential for distinct therapeutic benefits on the major prevalent symptoms of GWI. Future clinical trials are warranted to examine the feasibility, efficacy, durability and potential mechanisms of Tai Chi for improving health outcomes and relieving symptomology in GWI.