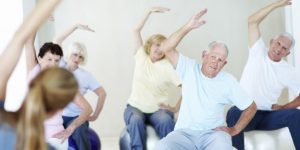 Improve Cognitive Function in the Elderly with Mind-Body Practices

“adults with Mild Cognitive Impairment can learn to practice mindfulness meditation, and by doing so may boost their cognitive reserve.” – Rebecca Erwin Wells

The aging process involves a systematic progressive decline in every system in the body, the brain included. This includes our cognitive (mental) abilities which decline with age including impairments in memory, attention, and problem-solving ability. It is inevitable and cannot be avoided. Research has found that mindfulness practices reduce the deterioration of the brain that occurs with aging restraining the loss of neural tissue. Indeed, the brains of practitioners of meditation and yoga have been found to degenerate less with aging than non-practitioners. Tai Chi and Qigong have also been shown to be beneficial in slowing or delaying physical and mental decline with aging.

The research findings are accumulating suggesting that a summarization of what has been learned is called for. In today’s Research News article “The Effects of Mind-Body Exercise on Cognitive Performance in Elderly: A Systematic Review and Meta-Analysis.” (See summary below or view the full text of the study at: https://www.ncbi.nlm.nih.gov/pmc/articles/PMC6313783/), Zhang and colleagues review, summarize, and perform a meta-analysis of the published randomized controlled studies (RCTs) of the effectiveness of the mind-body practices of yoga, Tai Chi and Qigong, and Pilates to improve cognitive performance in the elderly (aged 60 and over).

They identified 19 published RCTs that included a total of 2539 participants. They report that the published studies reveal a significant, albeit small, improvement in global cognitive function after mind-body practices. This included significant improvements in executive function, language ability, memory, and visuospatial ability. They also report that the amount of improvement was significantly related to the amount of mind-body exercise training. Interestingly, the effects appear to be better in elderly without any signs of dementia than in those with mild dementia symptoms.

The findings based upon a fair number of well-controlled studies are relatively consistent revealing that mind-body practices are safe and effective in improving cognitive function in individuals over 60 years of age. This suggests that engaging in these practices can reduce the decline in mental abilities occurring with aging. This suggests that engaging in yoga, Tai Chi and Qigong, or Pilates practices should be recommended for people over 60 years of age.

So, improve cognitive function in the elderly with mind-body practices.

“engagement in mindfulness meditation may enhance cognitive performance in older adults, and that with persistent practice, these benefits may be sustained.” – Grace Bullock

Background: As the situation of cognitive aging is getting worse, preventing or treating cognitive decline through effective strategies is highly important. This systematic review aims to investigate whether mind-body exercise is an effective approach for treating cognition decline. Methods: Searches for the potential studies were performed on the eight electronic databases (MEDLINE, Scopus, Web of Science, SPORTDiscus, CINAHL, PsycArtilces, CNKI, and Wanfang). Randomized controlled trials (RCTs) examining the effect of mind-body exercise on cognitive performance in older adults were included. Data were extracted and effect sizes were pooled with 95% confidence intervals (95% CI) using random-effects models. The Physiotherapy Evidence Database Scale was employed to examine the study quality. Results: Nineteen RCTs including 2539 elders (67.3% female) with fair to good study quality were identified. Mind-body exercise, relative to control intervention, showed significant benefits on cognitive performance, global cognition (Hedges’g = 0.23), executive functions (Hedges’g = 0.25 to 0.65), learning and memory (Hedges’g = 0.37 to 0.49), and language (Hedges’g = 0.35). In addition, no significant adverse events were reported. Conclusion: Mind-body exercise may be a safe and effective intervention for enhancing cognitive function among people aged 60 years or older. Further research evidence is still needed to make a more conclusive statement.