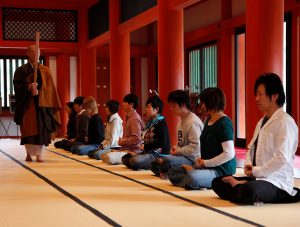 “meditation was never conceived of as a treatment for any health problem. Rather, it is a path one travels on to increase our awareness and gain insight into our lives.” – Madhav Goyal

In today’s Research News article “Changes in depression and anxiety through mindfulness group therapy in Japan: the role of mindfulness and self-compassion as possible mediators.” (See summary below or view the full text of the study at: https://www.ncbi.nlm.nih.gov/pmc/articles/PMC6378713/), Takahashi and colleagues recruited Japanese patients who suffered from anxiety or depression and provided them with an 8-week,  once a week for 2 hours, group mindfulness training that was a combination of Mindfulness-Based Stress Reduction (MBSR) and Mindfulness-Based Cognitive Therapy (MBCT). They also practiced at home daily. They were measured before and after training and 2 months later for mindfulness, depression, anxiety, mind wandering, self-compassion, and behavioral activation.

They found that after mindfulness training there were significant reductions in anxiety and depression and significant increases in mindfulness and self-compassion that were maintained 2 months later. They also found that the greater the changes in the levels of mindfulness and self-compassion produced by the training, the greater the reductions in anxiety and depression. Hence, the mindfulness training produced lasting improvements in the mental health of Japanese patients suffering from anxiety or depression.

So, mindfulness training improves anxiety and depression in Japanese patients.

“Mindfulness has been shown to help with people living with depression and anxiety. Americans often think a pill is the only way to fix things, but . . .  it doesn’t require any money to meditate so it seems like a purer way for people to live with these disorders.” – Katie Lindsley

Mindfulness-based interventions are increasingly being implemented worldwide for problems with depression and anxiety, and they have shown evidence of efficacy. However, few studies have examined the effects of a mindfulness-based group therapy based on standard programs for depression and anxiety until follow-up in Japan. This study addresses that gap. Furthermore, this study explored the mechanisms of action, focusing on mindfulness, mind wandering, self-compassion, and the behavioral inhibition and behavioral activation systems (BIS/BAS) as possible mediators.

We examined 16 people who suffered from depression and/or anxiety in an 8-week mindfulness group therapy. Measurements were conducted using questionnaires on depression and trait-anxiety (outcome variables), mindfulness, mind wandering, self-compassion, and the BIS/BAS (process variables) at pre- and post-intervention and 2-month follow-up. Changes in the outcome and process variables were tested, and the correlations among the changes in those variables were explored.