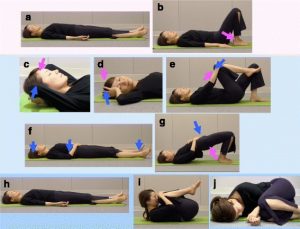 Myalgic encephalomyelitis/Chronic Fatigue Syndrome (CFS) occurs in about 0.2% of the population. It produces a profound, prolonged, and debilitating tiredness that is not corrected by rest. When severe, it can produce a chronic and extreme tiredness, so severe that sufferers can become bed-bound or need to use a wheel-chair. It produces muscle pain, brain fog and dizziness, poor memory, disturbed sleep and trouble with digestion.

Unfortunately, there are no known cures for CFS. The usual treatments for fatigue are targeted at symptom relief and include exercise and drugs. As an alternative to these traditional treatments, mindfulness training has been shown to reduce fatigue. The mindfulness practice of Yoga also includes exercise and it has been shown to be an effective treatment for the symptoms of Chronic Fatigue Syndrome (CFS). But the mechanism is not known of how yoga may be affecting the symptoms of CFS.

In today’s Research News article “Changes in circulating microRNA after recumbent isometric yoga practice by patients with myalgic encephalomyelitis/chronic fatigue syndrome: an explorative pilot study.” (See summary below or view the full text of the study at: https://www.ncbi.nlm.nih.gov/pmc/articles/PMC6886179/), Takakura and colleagues recruited female Chronic Fatigue Syndrome (CFS) who had not progressed over 6 months with standard treatment and were not able to work or carry on normal activities. They were provided 3 months of recumbent isometric yoga practice every 2 to 4 weeks and practiced at home daily. Before and after the yoga intervention the women had blood drawn and assayed for micro-ribonucleic acids (miRNAs) expressions. They also completed a measure of fatigue.

Micro-ribonucleic acid (miRNAs) contribute to gene silencing. Circulating miRNAs have been proposed as biomarkers for some medical conditions. Because the blood levels of these miRNAs are changed by isometric yoga practice at the same time that fatigue levels decrease suggests that these miRNAs may be involved in or a marker for Chronic Fatigue Syndrome (CFS).

Chronic Fatigue Syndrome (CFS) has no known causes and no effective treatments have been discovered. It is encouraging that yoga practice can help with this debilitating condition. In addition, the study provides an interesting possibility of miRNA changes in the blood that may be biomarkers for the disease. Further investigating these leads may lead to a better understanding of the biological mechanisms underlying CFS.

“Many believe that yoga is a powerful treatment for fatigue as it combines the tools of yoga postures, breathing techniques, and meditation that helps clear the brain fog and body fatigue.” – Rishikul Yogshala

Yoga is a representative mind-body therapy. Our previous studies have demonstrated that isometric yoga (i.e. yoga programs that we developed so individuals can practice yoga poses with a self-adjustable isometric load) reduces the fatigue of patients with myalgic encephalomyelitis/chronic fatigue syndrome (ME/CFS); however, the underlying mechanisms remain unclear. Several studies have suggested that the micro-ribonucleic acid (miRNA) expression of ME/CFS patients is different from that of healthy subjects. However, it has not to date been determined if the practice of isometric yoga can affect miRNA expression. Therefore, we sought to investigate if isometric yoga is associated with changes in the expression levels of serum miRNA of patients with ME/CFS.

The study included nine patients with ME/CFS who failed to show satisfactory improvement after at least 6 months of treatment administered at our hospital. Patients practiced recumbent isometric yoga for 3 months; they met with a yoga instructor every 2 to 4 weeks and participated in daily in-home sessions. The effect of recumbent isometric yoga on fatigue was assessed by comparing pre- and post-intervention scores on the Japanese version of the 11-item Chalder fatigue scale (CFQ 11). Patient blood samples were drawn pre- and post-intervention, just prior to practicing recumbent isometric yoga with an instructor. The serum was used for miRNA array analysis with known human miRNAs.

The average CFQ 11 score decreased significantly (from 25.3 ± 5.5 to 17.0 ± 5.8, p <  0.0001) after practicing recumbent isometric yoga for 3 months. The miRNA microarray analysis revealed that four miRNAs were significantly upregulated, and 42 were downregulated after the intervention period.

This explorative pilot study is the first to demonstrate changes in the serum levels of several miRNAs after regular practice of recumbent isometric yoga. These miRNAs might represent biomarkers for the fatigue-relieving effects of isometric yoga of patients with ME/CFS.

One thought on “Improve Chronic Fatigue Syndrome with Yoga Practice”