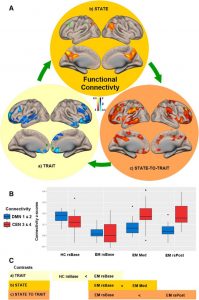 Reconfigure the Brain for Improved Executive Function with Meditation

“So, what’s the best way to build a better brain? Backed by 1000’s of studies, meditation is the neuroscientific community’s most proven way to upgrade the human brain.” – EOC Institute

Meditation practice results in a shift in mental processing. It produces a reduction of mind wandering and self-referential thinking and an increase in attention and higher-level thinking. The neural system that underlie mind wandering is termed the Default Mode Network (DMN) and consists in a set of brain structures including medial prefrontal cortex, posterior cingulate, lateral temporal cortex and the hippocampus. The neural system that underlies executive functions such as attention and higher-level thinking is termed the Central Executive Network (CEN) and includes the dorsolateral prefrontal cortex, posterior parietal cortex, and cingulate cortex. Hence the shift in thought process may well be associated with changes in the relationship of these systems.

In today’s Research News article “From State-to-Trait Meditation: Reconfiguration of Central Executive and Default Mode Networks.” (See summary below or view the full text of the study at: https://www.ncbi.nlm.nih.gov/pmc/articles/PMC6893234/), Bauer and colleagues recruited experienced meditators and meditation naïve adults. Their brains were measured with functional Magnetic Resonance Imaging (fMRI) at rest (trait mindfulness) and while engaged in a brief meditation (state mindfulness).

In general, it can be speculated that meditation practice alters the brain in ways that affect processing of information overall (trait), reducing thought and increasing awareness of the present moment environment. Meditation practice also alters the brain to increase the ability to attend during meditation and interrupt mind wandering. Hence, the brain activities reflect the subjective psychological changes seen in meditators.

So, reconfigure the brain for improved executive function with meditation.

“It seems the longer you do meditation, the better your brain will be at self-regulation. You don’t have to consume as much energy at rest and you can more easily get yourself into a more relaxed state.” – Bin He

This and other Contemplative Studies posts are e also available on Google+ https://plus.google.com/106784388191201299496/posts and on Twitter @MindfulResearch

While brain default mode network (DMN) activation in human subjects has been associated with mind wandering, meditation practice has been found to suppress it and to increase psychological well-being. In addition to DMN activity reduction, experienced meditators (EMs) during meditation practice show an increased connectivity between the DMN and the central executive network (CEN). However, the gradual change between DMN and CEN configuration from pre-meditation, during meditation, and post-meditation is unknown. Here, we investigated the change in DMN and CEN configuration by means of brain activity and functional connectivity (FC) analyses in EMs across three back-to-back functional magnetic resonance imaging (fMRI) scans: pre-meditation baseline (trait), meditation (state), and post-meditation (state-to-trait). Pre-meditation baseline group comparison was also performed between EMs and healthy controls (HCs). Meditation trait was characterized by a significant reduction in activity and FC within DMN and increased anticorrelations between DMN and CEN. Conversely, meditation state and meditation state-to-trait periods showed increased activity and FC within the DMN and between DMN and CEN. However, the latter anticorrelations were only present in EMs with limited practice. The interactions between networks during these states by means of positive diametric activity (PDA) of the fractional amplitude of low-frequency fluctuations (fALFFs) defined as CEN fALFF¯¯¯¯¯¯¯¯¯¯¯¯¯¯¯¯¯¯¯¯ − DMN fALFF¯¯¯¯¯¯¯¯¯¯¯¯¯¯¯¯¯¯¯¯¯ revealed no trait differences but significant increases during meditation state that persisted in meditation state-to-trait. The gradual reconfiguration in DMN and CEN suggest a neural mechanism by which the CEN negatively regulates the DMN and is probably responsible for the long-term trait changes seen in meditators and reported psychological well-being.