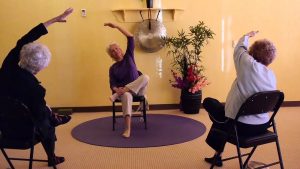 “The benefits of yoga, in general, include loosening up muscles, joints, and connective tissues, and improving strength and balance. But is it right for ME/CFS, with post-exertional malaise plus other problematic symptoms such as dizziness and muscle pain? We don’t have a lot of research on yoga for ME/CFS, but what we do have suggests that it just might be.” – Adrienne Dellwo

Chronic Fatigue Syndrome (CFS) occurs in about 0.2% of the population. It produces a profound, prolonged, and debilitating tiredness. When severe, it can produce a chronic and extreme tiredness, so severe that sufferers can become bed-bound or need to use a wheel-chair. It produces muscle pain, brain fog and dizziness, poor memory, disturbed sleep and trouble with digestion. Unfortunately, there are no known cures for CFS. The usual treatments for fatigue are targeted at symptom relief and include exercise and drugs. As an alternative to these traditional treatments, mindfulness training has been shown to reduce fatigue. The mindfulness practice of Yoga also includes exercise and it has been shown to be an effective treatment for the symptoms of Chronic Fatigue Syndrome (CFS). But the mechanism is not known of how yoga may be affecting the symptoms of CFS.

In today’s Research News article “The longitudinal effects of seated isometric yoga on blood biomarkers, autonomic functions, and psychological parameters of patients with chronic fatigue syndrome: a pilot study.” (See summary below or view the full text of the study at: https://www.ncbi.nlm.nih.gov/pmc/articles/PMC6836361/), Oka and colleagues recruited adults with Chronic Fatigue Syndrome (CFS) and randomly assigned them to receive either 20 minute, twice a week, for 2 months seated yoga practice with daily home practice or to no further treatment. Both groups continued to receive pharmacotherapy. They were measured before and after treatment for fatigue, anxiety, depression, and alexithymia. In addition, blood was drawn and assayed for DHEA-S, PRL, and TNF-α. Heart rate variability was also measured with and electrocardiogram (EKG).

These results suggest that seated yoga is effective in reducing fatigue and depression in patients with Chronic Fatigue Syndrome (CFS). The correlation analysis suggests that the reduction in fatigue is associated with decreases in inflammation (TNF-α) and an increase in the ability to sense emotions (decreased alexithymia). The correlations do not indicate causation. So, it is not clear if the changes in fatigue produced the reductions in inflammation and alexithymia, or the reverse, or a third factor is responsible. But it is clear that seated yoga practice improves fatigue and depression in patients with CFS.

This is important as Chronic Fatigue Syndrome (CFS) is relatively common and debilitating and pharmacological treatments are most often ineffective. The fact that yoga practice can improve the symptoms of CFS is encouraging. In addition, the fact that the yoga practice was performed in a seated position makes it better suited to patients with fatigue who lack the energy for more intense yoga practice. The results of this small pilot study further provide justification for performing a large randomized controlled trial. Seated yoga practice may be able to at least in part reduce the physical and psychological problems produced by CFS.

In a previous randomized controlled trial, we found that practicing seated isometric yoga regularly for 2 months improved the fatigue of patients with chronic fatigue syndrome (CFS) who are resistant to conventional therapy. The aim of this pilot study was to investigate the possible mechanisms behind this finding by comparing blood biomarkers, autonomic nervous function, and psychological indices before versus after an intervention period of seated isometric yoga practice.

Fifteen patients with CFS who did not show satisfactory improvements after at least 6 months of conventional therapy practiced seated isometric yoga (biweekly 20-min sessions with a yoga instructor and daily practice at home) for 2 months. The longitudinal effects of seated isometric yoga on fatigue, blood biomarkers, autonomic function, and psychological state were investigated by comparing the following parameters before and after the intervention period: Fatigue severity was assessed by the Chalder fatigue scale (FS) score. Levels of the blood biomarkers cortisol, DHEA-S, TNF-α, IL-6, prolactin, carnitine, TGF-β1, BDNF, MHPG, HVA, and α-MSH were measured. The autonomic nervous functions assessed were heart rate (HR) and HR variability. Psychological indices included the 20-item Toronto Alexithymia Scale (TAS-20) and the Hospital Anxiety and Depression Scale (HADS).

Practicing seated isometric yoga for 2 months resulted in significant reductions in the Chalder FS (P = 0.002) and HADS-depression (P = 0.02) scores. No significant changes were observed in any other parameter evaluated. The change in Chalder FS score was not correlated with the change in HADS-depression score. However, this change was positively correlated with changes in the serum TNF-α levels (P = 0.048), the high frequency component of HR variability (P = 0.042), and TAS-20 scores (P = 0.001).

Regular practice of seated isometric yoga for 2 months reduced the fatigue and depressive symptom scores of patients with CFS without affecting any other parameters we investigated. This study failed to identify the markers responsible for the longitudinal fatigue-relieving effect of seated isometric yoga. However, considering that the reduced fatigue was associated with decreased serum TNF-α level and TAS-20 scores, fatigue improvement might be related to reduced inflammation and improved alexithymia in these patients.