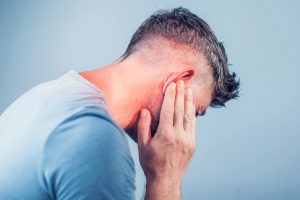 “Practicing mindfulness meditation in this way can cultivate a more helpful way of responding to tinnitus. People learn how to ‘allow’ and ‘accept’ tinnitus, rather than having to ‘fight it’ or ‘push it away’. Mindfulness does not aim to change the nature or sound of the tinnitus, but the therapy can lead to tinnitus becoming less intrusive, to a point where it is no longer a problem for people.” – Science News

Tinnitus is one of the most common symptoms to affect humanity. People with tinnitus live with a phantom noise that can range from a low hiss or ringing to a loud roar or squeal which can be present constantly or intermittently. It can have a significant impact on people’s ability to hear, concentrate, or even participate in everyday activities. The vast majority of people with tinnitus have what is known as subjective tinnitus. This is caused by unknown problems somewhere in the auditory system; the inner, middle, or outer ear, the part of the brain that translates nerve signals as sounds, or the auditory nerves.

Approximately 25 million to 50 million people in the United States experience it to some degree. Approximately 16 million people seek medical attention for their tinnitus, and for up to two million patients, debilitating tinnitus interferes with their daily lives. There are a number of treatments for tinnitus including, counseling, sound therapy, drugs, and even brain stimulation. Unfortunately, none of these treatments is very effective. Mindfulness practices have been shown to be effective in treating Tinnitus. The research is accumulating. So, it makes sense to pause and summarize what has been learned regarding the effectiveness of mindfulness practices to treat tinnitus.

In today’s Research News article “The Effect of Mindfulness-Based Interventions on Tinnitus Distress. A Systematic Review.” (See summary below or view the full text of the study at: https://www.ncbi.nlm.nih.gov/pmc/articles/PMC6838968/), Rademaker and colleagues review, summarize and perform a meta-analysis of randomized controlled trials of the effectiveness of mindfulness practices for the treatment of tinnitus. They found 7 published studies that included a total of 425 patients, 2 of which employed Mindfulness-Based Stress Reduction (MBSR), 2 used Mindfulness-Based Cognitive Therapy (MBCT), and 3 used other types of mindfulness training.

They report that the published research found that, regardless of the form of therapy, mindfulness-based interventions produced significant reductions in the psychological distress produced by tinnitus. They also report that 2 of 3 studies reported significant reduction in the level of ringing. They conclude that mindfulness training is a safe and effective treatment for tinnitus. Hence, it appears that learning to pay attention non-judgmentally and non-reactively to what is occurring in the present moment reduces the psychological distress produced by the ringing in the ears of tinnitus.

So, reduce the distress produced by ringing in the ears (tinnitus) with mindfulness.

“How you then react to tinnitus determines whether it is amplified further or fades away of its own accord. If you learn to accept the condition by paying conscious attention to the sounds by, for example, mindfully following how it rises and falls, and its changes in pitch and timbre, then you begin to accept the background noise. You can begin relaxing into it. The brain then no longer sees the noise as alarming and begins to naturally screen it out once again.” – Danny Penman

Objectives: With this systematic review we aim to provide an overview of the evidence of the effect of Mindfulness Based Interventions (MBIs) on (1) tinnitus distress and (2) anxiety and/or depression in tinnitus patients.

Methods: We conducted a systematic search in PubMed Medline, EMBASE and PsycInfo combining the terms and synonyms of “Tinnitus” and “Mindfulness.” The most recent search was performed on December 4th 2018. We wrote this systematic review according to the Preferred Reporting Items for Systematic Reviews and Meta-Analyses (PRISMA). Two independent authors identified studies, assessed the risk of bias and extracted data. Studies were considered eligible if they included adults with tinnitus, performed a protocolled MBI and measured tinnitus distress with validated questionnaires. Studies were appraised with either the Cochrane Risk of Bias tool or the MINORS criteria, depending on their design.

Conclusions: A decrease of tinnitus distress scores in MBIs can be observed directly post-therapy based on moderate to high quality studies. This was found regardless of the heterogeneity of patients, study design, type of MBI and outcome assessment. Two out of three RCTs found clinically relevant decreases in tinnitus distress scores. No effect of MBIs was observed for depression and anxiety in tinnitus patients. Long term effects remain uncertain. Mindfulness may have a place in tinnitus therapy, although the long term effects need to be studied.