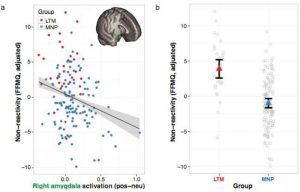 “Of all the reasons people have for trying meditation, being less emotionally reactive is usually pretty high up.” – Alice G. Walton

There has accumulated a large amount of research demonstrating that meditation practice has significant benefits for psychological, physical, and spiritual wellbeing. It has been shown to improve emotions and their regulation. Practitioners demonstrate more positive and less negative emotions and the ability to fully sense and experience emotions, while responding to them in appropriate and adaptive ways. In other words, mindful people are better able to experience yet control their responses to emotions. The ability of mindfulness training to improve emotion regulation is thought to be the basis for a wide variety of benefits that mindfulness provides to mental health and the treatment of mental illness especially depression and anxiety disorders.

One way that meditation practices may produce these benefits is by altering the brain. The nervous system is a dynamic entity, constantly changing and adapting to the environment. It will change size, activity, and connectivity in response to experience. These changes in the brain are called neuroplasticity. Over the last decade neuroscience has been studying the effects of contemplative practices on the brain and has identified neuroplastic changes in widespread areas. In other words, meditation practice appears to mold and change the brain, producing psychological, physical, and spiritual benefits.

In today’s Research News article “Impact of short- and long-term mindfulness meditation training on amygdala reactivity to emotional stimuli.” (See summary below or view the full text of the study at: https://www.ncbi.nlm.nih.gov/pmc/articles/PMC6671286/), Kral and colleagues recruited health adults who were meditation naïve or who were long term meditators having meditated daily for at least 3 years. They viewed pictures that were produced either positive or negative emotions while having their brains scanned with functional Magnetic Resonance imaging (fMRI). They also rated the pictures emotional content. The meditation naïve participants were randomly assigned to receive either a Mindfulness-Based Stress Reduction (MBSR) or health education program. The MBSR program consists of 8 weekly 2-hour group sessions involving meditation, yoga, body scan, and discussion. The participants were also encouraged to perform daily practice at home. After the 8-week training period the participants also had their brains scanned with functional Magnetic Resonance imaging (fMRI) while viewing the positive, neutral, and negative emotional pictures.

These results suggest that both long-term meditation practice and short-term training impacts the brain in such a way as to reduce the activation of a brain structure (right Amygdala) that is thought to underlie emotional reactivity in response to stimuli. It is interesting to note that the changes were detected on the right side of the brain only as the right side is thought to be the side of the brain that underlies emotion while the left side is thought to underlie more analytical and rational processes.

Short-term training appears to impact the ability of the Amygdala to affect the portion of the nervous system that is thought to underlie higher mental processes (Ventromedial Prefrontal Cortex). That this increase in functional connectivity was not observed in long-term meditators suggests that over time the reduced activation of the Amygdala produced by meditation practice becomes sufficient by itself to reduce emotional reactivity.

So, reduce the brain’s emotional reactivity with meditation practice.

“meditation improves emotional health. . . people can acquire these benefits regardless of their ‘natural’ ability to be mindful. It just takes some practice.” – Yanli Lin

Meditation training can improve mood and emotion regulation, yet the neural mechanisms of these affective changes have yet to be fully elucidated. We evaluated the impact of long- and short-term mindfulness meditation training on the amygdala response to emotional pictures in a healthy, non-clinical population of adults using blood-oxygen level dependent functional magnetic resonance imaging. Long-term meditators (N=30, 16 female) had 9,081 hours of lifetime practice on average, primarily in mindfulness meditation. Short-term training consisted of an 8-week Mindfulness-Based Stress Reduction course (N=32, 22 female), which was compared to an active control condition (N=35, 19 female) in a randomized controlled trial. Meditation training was associated with less amygdala reactivity to positive pictures relative to controls, but there were no group differences in response to negative pictures. Reductions in reactivity to negative stimuli may require more practice experience or concentrated practice, as hours of retreat practice in long-term meditators was associated with lower amygdala reactivity to negative pictures – yet we did not see this relationship for practice time with MBSR. Short-term training, compared to the control intervention, also led to increased functional connectivity between the amygdala and a region implicated in emotion regulation – ventromedial prefrontal cortex (VMPFC) – during affective pictures. Thus, meditation training may improve affective responding through reduced amygdala reactivity, and heightened amygdala–VMPFC connectivity during affective stimuli may reflect a potential mechanism by which MBSR exerts salutary effects on emotion regulation ability.