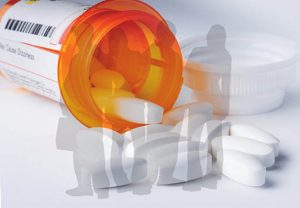 “mindfulness-based interventions could help people dependent on opioids increase their self-awareness and self-control over cravings and be less reactive to emotional and physical pain. Individuals with an opioid addiction could also be taught to change their negative thoughts and savor pleasant events, which may help them to regulate their emotions and experience more enjoyment.” – Science News

Substance abuse and addiction is a terrible problem, especially opioid pain relievers. Opioid addiction has become epidemic and is rapidly increasing affecting more than 2 million Americans and an estimated 15 million people worldwide. In the U.S more than 20,000 deaths yearly were attributed to an overdose of prescription opioids, and another 13,000 deaths from heroin overdose. These statistics, although startling are only the tip of the iceberg. Drug use is associated with suicide, homicide, motor-vehicle injury, HIV infection, pneumonia, violence, mental illness, and hepatitis. It can render the individual ineffective at work, it tears apart families, it makes the individual dangerous both driving and not.

An effective treatment for addiction has been elusive. Most programs and therapies to treat addictions have poor success rates. Recent research is indicating that mindfulness has been found to be effective in treating addictions. Mindfulness-Oriented Recovery Enhancement (MORE) was specifically developed to employ mindfulness training along with other proven methods to assist addicts in remaining off of drugs. MORE involves mindful breathing and body scan meditations, cognitive reappraisal to decrease negative emotions and craving, and savoring to augment natural reward processing and positive emotion.

One method to observe reward processing in the brain is to measure the changes in the electrical activity that occur in response to specific reward related stimuli. These are called event-related potentials or ERPs. The signal following a stimulus changes over time. The fluctuations of the signal after specific periods of time are thought to measure different aspects of the nervous system’s processing of the stimulus. The Late Positive Potential (LPP) response in the evoked potential (ERP) is a positive going electrical response occurring between a 4 to 8 tenths of a second following the target stimulus presentation. The LPP is thought to reflect attention to the emotional features of a stimulus.

In today’s Research News article “Mindfulness-Oriented Recovery Enhancement remediates hedonic dysregulation in opioid users: Neural and affective evidence of target engagement.” (See summary below or view the full text of the study at: https://www.ncbi.nlm.nih.gov/pmc/articles/PMC6795512/), Garland and colleagues recruited chronic pain patients who were opioid users. They were randomly assigned to receive 8 weeks of either Mindfulness-Oriented Recovery Enhancement (MORE) or a therapist led support group. They were measured for brain activity with an electroencephalogram (EEG) before and after treatment and opioid use at 3-month follow-up. In one experiment they measure the EEG response (Late Positive Potential (LPP)) while being presented with opioid cues (pictures of pills and pill bottles) or a neutral picture either normally or while attempting to not react or judge the stimuli. In a separate experiment with a similar procedure except that the participants were presented with natural reward pictures (e.g., social affiliation, natural beauty, and athletic victories) or neutral pictures.

They also investigated the subjective emotional responses of the participants to the opioid and natural reward stimuli and found that after Mindfulness-Oriented Recovery Enhancement (MORE) the participants had larger increases in response to natural reward stimuli and smaller responses to opioid related stimuli. At the 3 month follow-up they found that MORE reduced the use of opioids to a greater extent than the support group and that it did so directly and also indirectly by increasing natural reward responses which, in turn, reduced opioid use.

These results suggest that responses to the rewarding aspects of stimuli is important in opioid addiction and that Mindfulness-Oriented Recovery Enhancement (MORE) reduces opioid use in addicted individuals they demonstrate that MORE reduces emotional responses to opioid cues while amplifying responses to natural rewards. This suggests that mindfulness treatment reduces opioid use by altering the addict’s responses to stimuli related to the addiction and naturally rewarding stimuli; amplifying natural reward while suppressing opioid rewards. This makes opioids less rewarding and natural stimuli more rewarding.

Addiction neuroscience models posit that recurrent drug use increases reactivity to drug-related cues and blunts responsiveness to natural rewards, propelling a cycle of hedonic dysregulation that drives addictive behavior. Here, we assessed whether a cognitive intervention for addiction, Mindfulness-Oriented Recovery Enhancement (MORE), could restructure reward responsiveness from valuation of drug-related reward back to valuation of natural reward. Before and after 8 weeks of MORE or a support group control, prescription opioid users (N = 135) viewed opioid and natural reward cues while an electroencephalogram biomarker of target engagement was assessed. MORE was associated with decreased opioid cue-reactivity and enhanced capacity to regulate responses to opioid and natural reward cues. Increased positive affective responses to natural reward cues were associated with decreased craving and mediated MORE’s therapeutic effects on opioid misuse. This series of randomized experiments provide the first neurophysiological evidence that an integrative behavioral treatment can remediate hedonic dysregulation among chronic opioid users.