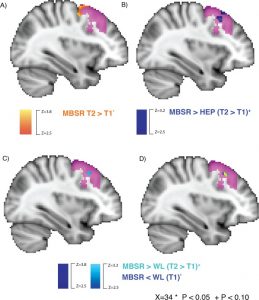 “MBSR and RR body scans both induced a common increased functional connectivity between the brain’s ventromedial prefrontal cortex, which plays a role in attention.” – GORAMA

In today’s Research News article “Mindfulness-Based Stress Reduction-related changes in posterior cingulate resting brain connectivity.” (See summary below or view the full text of the study at: https://www.ncbi.nlm.nih.gov/pmc/articles/PMC6778831/), Kral and colleagues recruited healthy meditation-naïve adults and randomly assigned them to 8 weeks of Mindfulness-Based Stress Reduction (MBSR) program, 8 weeks of a Health Education Program, or to a wait-list control condition. The MBSR program consisted of 8 weekly group sessions involving meditation, yoga, body scan, and discussion. The participants were also encouraged to perform daily practice at home. The amount of home practice time was recorded. Before and after the 8-week intervention they were measured for emotional styles and participated in 14 days of experience sampling with 6 to 8 prompts per day via cellphone to indicate attention to task or mind wandering. They also underwent brain scanning with functional Magnetic Resonance Imaging (fMRI) before and after the intervention and 5.5 months later.

They found that in comparison to baseline and the health education and wait-list control groups, the participants who underwent the Mindfulness-Based Stress Reduction (MBSR) program had a significant increase in the functional connectivity between the posterior cingulate cortex and the dorsomedial prefrontal cortex. They also found that the higher the self-reported attention levels and the greater the number of days of practice the MBSR participants engaged in, the greater the increase in functional connectivity. The connectivity increases and the relationships with attention and practice were no longer significant at the 5.5-month follow-up. There were no significant changes in mind-wandering.

These results are interesting and suggest that participation in the Mindfulness-Based Stress Reduction (MBSR) program produces short-term changes in the brain’s system that underlies executive function and attention (the posterior cingulate cortex and the dorsomedial prefrontal cortex). The results further suggest that the amount of change in the brain system is associated with attentional changes and the amount of practice.

That mindfulness training in general and Mindfulness-Based Stress Reduction (MBSR) in particular improves attention and the neural systems underlying attention and executive function have been previously demonstrated. The present study demonstrates that these changes are related to the amounts of continuing practice suggesting the importance of practice outside of formal training sessions.

So, improve the brain’s attentional networks with mindfulness.

“mindfulness meditation decreases activity in the part of the brain that is in charge of mind-wandering and self-centeredness. Although we all struggle with taming that Monkey Mind, meditators are better at snapping out of it when the brain gets into a cycle of overthinking or negativity.” –  Jaime Carlo-Casellas