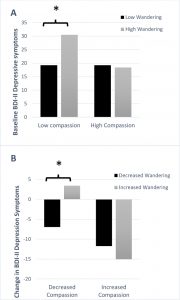 Increase Self-Compassion and Decrease Mind Wandering in Depression with Mindfulness

“MBCT program is a group intervention that allows participants to become aware of how conditioned patterns of mind and mood can trigger depression relapse and sustain current symptoms of depression.  Through the practice of mindful awareness, they develop the capacity to mindfully disengage from distressing moods and negative thoughts.” – Center for Mindfulness in Medicine

Clinically diagnosed depression is the most common mental illness, affecting over 6% of the population. But, of patients treated initially with drugs only about a third attained remission of the depression. After repeated and varied treatments including drugs, therapy, exercise etc. only about two thirds of patients attained remission. But drugs often have troubling side effects and can lose effectiveness over time.

Mindfulness-Based Cognitive Therapy (MBCT) is an alternative treatment to drugs that was specifically developed to treat depression. MBCT involves mindfulness training, containing sitting, walking and body scan meditations, and cognitive therapy that attempts to teach patients to distinguish between thoughts, emotions, physical sensations, and behaviors, and to recognize irrational thinking styles and how they affect behavior. MBCT has been found to be effective in treating depression. The exact mechanisms by which MBCT improves depression need exploration.

In today’s Research News article “Compassionate Hearts Protect Against Wandering Minds: Self-compassion Moderates the Effect of Mind-Wandering on Depression.” (See summary below or view the full text of the study at: https://www.ncbi.nlm.nih.gov/pmc/articles/PMC6426326/), Greenberg and colleagues recruited depressed adults and randomly assigned them to receive either 8 weekly 2-hour sessions of Mindfulness-Based Cognitive Therapy (MBCT) or to a wait list control condition. MBCT participants were also asked to practice at home. All participants continued to receive their usual treatments. They were measured before and after treatment for depression, self-compassion, and mind wandering.

So, increase self-compassion and decrease mind wandering in depression with mindfulness.

“ When you’re struggling with depression, the last thing you want to do is be self-compassionate. But this is precisely what can help.” – Margarita Tartakovsky