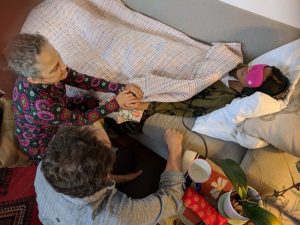 Improve the Psychological Health of Cancer Patients with Psilocybin

“Our research has shown that, in a medically controlled setting with expert screening and preparation, psilocybin can relieve the symptoms of anxiety and depression often found in patients with a cancer diagnosis.” – Heffter Research Institute

Psilocybin is a psychedelic substance that is found naturally in a number of varieties of mushrooms. It has been used for centuries particularly by Native Americans for their spiritual practices. When studied in the laboratory under double blind conditions, Psilocybin has been shown to “reliably occasion deeply personally meaningful and often spiritually significant experiences (e.g. mystical-type experiences).”

In today’s Research News article “Psilocybin produces substantial and sustained decreases in depression and anxiety in patients with life-threatening cancer: A randomized double-blind trial.” (See summary below or view the full text of the study at: https://www.ncbi.nlm.nih.gov/pmc/articles/PMC5367557/), Griffiths and colleagues recruited patients with a potentially life threatening cancer diagnosis and high levels of anxiety and/or a mood disorder. They were randomly assigned to receive psilocybin in the lab in a living room type highly supportive environment with either a low dose in the first session and the high dose in the second 5 weeks later or in reverse order with the high dose first followed by low dose. Doses were administered double blind.

They were measured during the session for heart rate and respiration and ratings by attending monitors. After the drug effects subsided (7 hours after administration) they were measured for hallucinogen ratings, altered states of consciousness, mystical experiences, states of consciousness, and mysticism. They were also measured at baseline and five weeks after each session and 6 months later for anxiety, depression, mood, psychiatric symptoms, quality of life, optimism, spirituality, death acceptance, death transcendence, purpose in life, life coherence, and persisting effects of psilocybin. Family friends, and co-workers were also asked to rate the participant’s behavior and attitudes.

After the sessions no continuing adverse events were detected. During the sessions there were significant dose dependent increases in heart rate, blood pressure, joy and happiness, and visual experiences, and all ratings by the session monitors of behavior and mood. These effects all dissipated by the end of the session.

In comparison to baseline at all time points after psilocybin administration there were clinically significant decreases in anxiety, depression, psychiatric symptoms and significant increases in mood, quality of life, optimism, spirituality, death acceptance, death transcendence, purpose in life, and life coherence. Family friends, and co-workers also reported significant improvements in mood and behavior in the cancer patients. They also found that the greater the mystical experiences that the cancer patients had during the sessions the greater the levels of meaningfulness, spiritual significance, increased life satisfaction, meaningful existence, death acceptance, death transcendence, purpose in life, and coherence and the lower the levels of anxiety and depression.

The results suggest that psilocybin administration to patients with life threatening cancer diagnoses who also had high levels of anxiety and/or mood disturbance produced large and clinically significant improvements in their psychological and spiritual well-being. These benefits were observed by clinicians, session monitors, family, friend, and co-workers, and the patients themselves. These results are remarkable particularly due to the magnitude of the effects, the breadth of the benefits, their obviousness to all concerned, and the persistence of the effects, generally still large and significant 6 months after the session. This suggests that psilocybin treatment may be greatly beneficial to relieve the psychological suffering and the spiritual difficulties precipitated by cancer diagnosis.

So, improve the psychological health of cancer patients with psilocybin.

“a substantial majority of people suffering cancer-related anxiety or depression found considerable relief for up to six months from a single large dose of psilocybin — the active compound in hallucinogenic “magic mushrooms.” – Vanessa McMains

Cancer patients often develop chronic, clinically significant symptoms of depression and anxiety. Previous studies suggest that psilocybin may decrease depression and anxiety in cancer patients. The effects of psilocybin were studied in 51 cancer patients with life-threatening diagnoses and symptoms of depression and/or anxiety. This randomized, double-blind, cross-over trial investigated the effects of a very low (placebo-like) dose (1 or 3 mg/70 kg) vs. a high dose (22 or 30 mg/70 kg) of psilocybin administered in counterbalanced sequence with 5 weeks between sessions and a 6-month follow-up. Instructions to participants and staff minimized expectancy effects. Participants, staff, and community observers rated participant moods, attitudes, and behaviors throughout the study. High-dose psilocybin produced large decreases in clinician- and self-rated measures of depressed mood and anxiety, along with increases in quality of life, life meaning, and optimism, and decreases in death anxiety. At 6-month follow-up, these changes were sustained, with about 80% of participants continuing to show clinically significant decreases in depressed mood and anxiety. Participants attributed improvements in attitudes about life/self, mood, relationships, and spirituality to the high-dose experience, with >80% endorsing moderately or greater increased well-being/life satisfaction. Community observer ratings showed corresponding changes. Mystical-type psilocybin experience on session day mediated the effect of psilocybin dose on therapeutic outcomes.