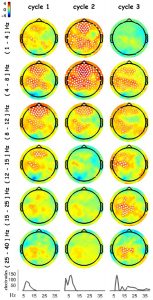 We spend about a third of our lives in sleep, but we know very little about it. It is known that sleep is not a unitary phenomenon. Rather, it involves several different states that can be characterized by differences in physiological activation, neural activity, and subjective experiences. In the waking state the nervous system shows EEG activity that is termed low voltage fast activity. The electrical activity recorded from the scalp is rapidly changing but only with very small size waves. When sleep first occurs, the individual enters into a stage called slow-wave sleep, sometimes called non-REM sleep. The heart rate and blood pressure decline even further and the muscles become very soft and relaxed. In this state the EEG shows a characteristic waveform known as the theta rhythm, which is a large change in voltage recorded that oscillates at a rate of 4 to 8 cycles per second. As the individual goes even deeper into sleep something remarkable happens as the individual enters into rapid eye movement sleep (REM sleep). Here the muscles become extremely inhibited and flaccid, but the eyes move rapidly under the closed eyelids as if the individual was looking around. At the same time the heart rate and blood pressure increase and become very variable and sometimes very high.

In today’s Research News article “Acute effects of meditation training on the waking and sleeping brain: Is it all about homeostasis?” (See summary below or view the full text of the study at: https://www.ncbi.nlm.nih.gov/pmc/articles/PMC6534352/), Dentico and colleagues recruited long-term meditators (at least 3-years of experience) and a group of age and gender matched non-meditators. They had their overnight electroencephalograms (EEG) recorded during sleep and after waking in the lab under three conditions, baseline, after a day of intensive focused meditation, and after a day of intensive loving kindness meditation. The meditation simulated a meditation retreat format for 2 days. The non-meditators rested during similar periods. They were also measured for depression, mental health issues, sleep disorders, insomnia, fatigue, sleepiness, and common phenomenological features of meditation.

They found that the sleep and waking EEGs were not different between the two types of meditation, focused or loving kindness. After intensive meditation practice there were significant increases after sleep in waking slow (8 hz.) and fast (15 hz.) waves in the EEG recorded from the prefrontal and parietal cortical regions. They also reported that the greater the amount of previous meditation experience the greater the waking high frequency waveforms after a day of intensive meditation. They also found that the EEG activities in in the theta frequency range (4-8 hz.) in different brain regions were highly related during non-REM sleep in long-term meditators.

So, change the brain’s electrical activity to during sleep and wakefulness with meditation.

“meditation has lasting effects on the plastic brain, and that gamma activity during non-REM sleep may be a reliable marker for the extent of these changes.” – Plastic Brain

Our recent finding of a meditation-related increase in low-frequency NREM sleep EEG oscillatory activities peaking in the theta-alpha range (4–12 Hz) was not predicted. From a consolidated body of research on sleep homeostasis, we would expect a change peaking in slow wave activity (1–4 Hz) following an intense meditation session. Here we compared these changes in sleep with the post-meditation changes in waking rest scalp power to further characterize their functional significance. High-density EEG recordings were acquired from 27 long-term meditators (LTM) on three separate days at baseline and following two 8-hr sessions of either mindfulness or compassion-and-loving-kindness meditation. Thirty-one meditation-naïve participants (MNP) were recorded at the same time points. As a common effect of meditation practice, we found increases in low and fast waking EEG oscillations for LTM only, peaking at eight and 15 Hz respectively, over prefrontal, and left centro-parietal electrodes. Paralleling our previous findings in sleep, there was no significant difference between meditation styles in LTM as well as no difference between matched sessions in MNP. Meditation-related changes in wakefulness and NREM sleep were correlated across space and frequency. A significant correlation was found in the EEG low frequencies (<12 Hz). Since the peak of coupling was observed in the theta-alpha oscillatory range, sleep homeostatic response to meditation practice is not sufficient to explain our findings. Another likely phenomenon into play is a reverberation of meditation-related processes during subsequent sleep. Future studies should ascertain the interplay between these processes in promoting the beneficial effects of meditation practice.