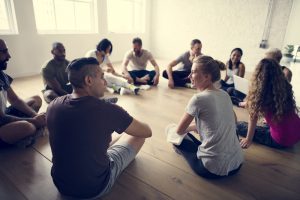 “Mindfulness-Based Cognitive Therapy (MBCT) is designed to help people who suffer repeated bouts of depression and chronic unhappiness. It combines the ideas of cognitive therapy with meditative practices and attitudes based on the cultivation of mindfulness. The heart of this work lies in becoming acquainted with the modes of mind that often characterize mood disorders while simultaneously learning to develop a new relationship to them.” – MBCT.com

Clearly, there is a need for treatment alternatives that can be effective alone or in combination with drugs. Mindfulness-Based Cognitive Therapy (MBCT) was specifically developed to treat depression. MBCT involves mindfulness training, containing sitting, walking and body scan meditations, and cognitive therapy that attempts to teach patients to distinguish between thoughts, emotions, physical sensations, and behaviors, and to recognize irrational thinking styles and how they affect behavior. MBCT has been found to be effective in treating depression. The evidence is accumulating. So, it is important at this point to step back and review the published studies of the application of CBT and MBCT for the prevention of major depressive disorder relapse.

In today’s Research News article “Efficacy of Mindfulness-Based Cognitive Therapy in Prevention of Depressive Relapse: An Individual Patient Data Meta-analysis From Randomized Trials.” (See summary below or view the full text of the study at: https://www.ncbi.nlm.nih.gov/pmc/articles/PMC6640038/), Kuyken and colleagues review, summarize, and perform a meta-analysis of published research studies on the effectiveness of Mindfulness-Based Cognitive Therapy (MBCT) for preventing depression relapse. They identified 9 randomized controlled trials including a total of 1258 patients.

They report that the published studies found that the likelihood of relapse of depression over a 60-week period following treatment was significantly lower following Mindfulness-Based Cognitive Therapy (MBCT) than treatment as usual, other active treatments, or antidepressant drugs.

This is striking evidence that MBCT is very effective in preventing depression relapse even when compared to other active treatments including antidepressant drugs.  This conclusion is reached based upon the work of multiple different investigator, in different circumstances and with different sets of patients, suggesting broad applicability. This suggests that MBCT treatment should be considered as the gold standard to prevent the reoccurrence of depression in patients with recurrent depression.

So, prevent depression relapse with mindfulness.

“Sometimes normal sadness is a powerful trigger for someone who has recovered from a depressive state to relapse into another bout of depression. Rather than try to avoid or eliminate sadness or other negative emotions, one learns to change their relationship with these emotions by practicing meditation and other mindfulness exercises.” – Psychology Today

Relapse prevention in recurrent depression is a significant public health problem, and antidepressants are the current first-line treatment approach. Identifying an equally efficacious nonpharmacological intervention would be an important development.

To conduct a meta-analysis on individual patient data to examine the efficacy of mindfulness-based cognitive therapy (MBCT) compared with usual care and other active treatments, including antidepressants, in treating those with recurrent depression.

English-language studies published or accepted for publication in peer-reviewed journals identified from EMBASE, PubMed/Medline, PsycINFO, Web of Science, Scopus, and the Cochrane Controlled Trials Register from the first available year to November 22, 2014. Searches were conducted from November 2010 to November 2014.

Randomized trials of manualized MBCT for relapse prevention in recurrent depression in full or partial remission that compared MBCT with at least 1 non-MBCT treatment, including usual care.

This was an update to a previous meta-analysis. We screened 2555 new records after removing duplicates. Abstracts were screened for full-text extraction (S.S.) and checked by another researcher (T.D.). There were no disagreements. Of the original 2555 studies, 766 were evaluated against full study inclusion criteria, and we acquired full text for 8. Of these, 4 studies were excluded, and the remaining 4 were combined with the 6 studies identified from the previous meta-analysis, yielding 10 studies for qualitative synthesis. Full patient data were not available for 1 of these studies, resulting in 9 studies with individual patient data, which were included in the quantitative synthesis.

Mindfulness-based cognitive therapy appears efficacious as a treatment for relapse prevention for those with recurrent depression, particularly those with more pronounced residual symptoms. Recommendations are made concerning how future trials can address remaining uncertainties and improve the rigor of the field.