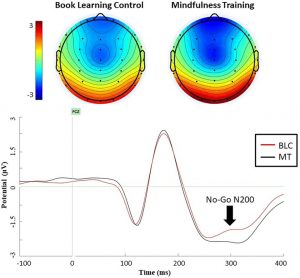 Improve Attentional Monitoring of Others Emotions with Mindfulness

Mindfulness practice has been shown to improve emotion regulation. Practitioners demonstrate the ability to fully sense and experience emotions, but respond to them in more appropriate and adaptive ways. In other words, mindful people are better able to experience yet control their responses to emotions. The ability of mindfulness training to improve emotion regulation is thought to be the basis for a wide variety of benefits that mindfulness provides to mental health and the treatment of mental illness especially depression and anxiety disorders.

There is evidence that mindfulness training improves emotion regulation by altering the brain. A common method to study the activity of the nervous system is to measure the electrical signal at the scalp above brain regions. Changes in this activity are measurable with mindfulness training. One method to observe emotional processing in the brain is to measure the changes in the electrical activity that occur in response to specific emotional stimuli. These are called event-related potentials or ERPs. The signal following a stimulus changes over time.

In today’s Research News article “Brief mindfulness training enhances cognitive control in socioemotional contexts: Behavioral and neural evidence.” (See summary below or view the full text of the study at: https://www.ncbi.nlm.nih.gov/pmc/articles/PMC6641506/), Quaglia and colleagues recruited healthy adults and randomly assigned them to receive 4 20-minute sessions of either mindfulness training or book listening. They were measured before and after training for mindfulness and were tested with an emotional go no-go task in which they were asked to press a button when a picture of a face was presented that expressed a particular emotion and not respond to faces with other emotions. The pictures were of faces expression either anger, happiness, or neutral emotions. During the task the brain electrical activity was recorded with an electroencephalograph (EEG).

So, improve attentional monitoring of others emotions with mindfulness.

“our cognitive structures, as a developmental system, have the capacity to advance to a higher (more accurate) level of understanding about social and psychological reality, as the result of learning from the interacting experiences.” – Key Sun

In social contexts, the dynamic nature of others’ emotions places unique demands on attention and emotion regulation. Mindfulness, characterized by heightened and receptive moment-to-moment attending, may be well-suited to meet these demands. In particular, mindfulness may support more effective cognitive control in social situations via efficient deployment of top-down attention. To test this, a randomized controlled study examined effects of mindfulness training (MT) on behavioral and neural (event-related potentials [ERPs]) responses during an emotional go/no-go task that tested cognitive control in the context of emotional facial expressions that tend to elicit approach or avoidance behavior. Participants (N = 66) were randomly assigned to four brief (20 min) MT sessions or to structurally equivalent book learning control sessions. Relative to the control group, MT led to improved discrimination of facial expressions, as indexed by d-prime, as well as more efficient cognitive control, as indexed by response time and accuracy, and particularly for those evidencing poorer discrimination and cognitive control at baseline. MT also produced better conflict monitoring of behavioral goal-prepotent response tendencies, as indexed by larger No-Go N200 ERP amplitudes, and particularly so for those with smaller No-Go amplitude at baseline. Overall, findings are consistent with MT’s potential to enhance deployment of early top-down attention to better meet the unique cognitive and emotional demands of socioemotional contexts, particularly for those with greater opportunity for change. Findings also suggest that early top-down attention deployment could be a cognitive mechanism correspondent to the present-oriented attention commonly used to explain regulatory benefits of mindfulness more broadly.