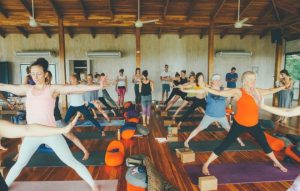 Improve Relationships with the Self and Others with Yoga Practice

“Cultivating mindfulness can help you face the inevitable difficulties and disappointments that arise in relationship with equanimity, compassion, and loving-kindness.” – Phillip Moffit

Humans are social animals. This is a great asset for the species as the effort of the individual is amplified by cooperation. In primitive times, this cooperation was essential for survival. But in modern times it is also essential, not for survival but rather for making a living and for the happiness of the individual. This ability to cooperate is so essential to human flourishing that it is built deep into our DNA and is reflected in the structure of the human nervous system. Mindfulness has been found to improve relationships with others.

It is not only important to develop relationships with others but to also develop relationship with the self. There is a widespread problem in the West that many people don’t seem to like themselves. The antidote to self-dislike is self-compassion. Self-compassion is “treating oneself with kindness and understanding when facing suffering, seeing one’s failures as part of the human condition, and having a balanced awareness of painful thoughts and emotions” – Kristin Neff.  Unfortunately, there has been little systematic research of the effectiveness of yoga practice in developing relationships with the self and others.

In today’s Research News article “The Daily Influences of Yoga on Relational Outcomes Off of the Mat.” (See summary below or view the full text of the study at: https://www.ncbi.nlm.nih.gov/pmc/articles/PMC6521757/), Kishida and colleagues recruited adult yoga practitioners. They had the participants report their yoga practice characteristics and then maintained an online 21-day diary of yoga practice, mindfulness, self-compassion, compassion, social connectedness, psychological health, and physical health.

This is a correlational study, so causation cannot be concluded, But previous studies have clearly shown that mindfulness practices such as yoga produce improvements in psychological health, self-compassion, compassion, and social connectedness. So, it is likely that yoga practice was the cause of the benefits reported in the present study.

So, improve relationships with the self and others with yoga practice.

“In the same way as yoga requires knowledge and skills for the perfection of the practice, relationships require relational skills in order for them to grow and unfold over time.” – Joel Feldman

Despite the wide array of health benefits that have been evidenced with yoga, a clear gap exists examining how yoga impacts connections with oneself and to others.

Community-dwelling yoga practitioners (n = 104, age range: 18–76 years) with a yoga practice of at least once a week were recruited for a 21-day daily diary study. Practitioners were asked to complete daily Internet surveys at the end of the day which included questions with respect to one’s yoga practice and relational domains (i.e., mindfulness, [self-]compassion, and social connectedness).

Multilevel analyses revealed yoga and relational outcomes to be dynamic phenomena, indicated by substantial variation (intraclass correlations = 0.34–0.48) at the within-person level. On days when an individual practiced more yoga than their usual, greater mindfulness (b = 2.93, standard error [SE] = 0.39, P < 0.05) and self-compassion (b = 1.45, SE = 0.46, P < 0.05) were also reported. 1-1-1 multilevel mediation models demonstrated that yoga has an indirect effect on both compassion and social connectedness through increases in mindfulness at the within- and between-person levels. In models testing self-compassion as the mediator, the indirect effect of daily yoga practice on compassion was significant, although limited to the within-person level.

These findings suggest that a routine yoga practice could positively impact how a practitioner relates to theirselves and to others, both on a day-to-day basis, and with accumulated practice.