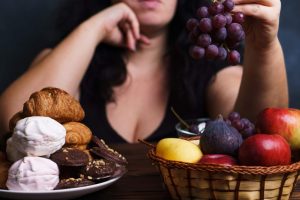 “self-compassion—a necessary component of healing from any eating disorder. Women who binge often feel shame and guilt about their behavior. “Women hear all the time that lack of willpower made you fat, made you binge. That message is that if you do binge, you’re bad,” – Kelly McDonigal

Obesity has become an epidemic in the industrialized world. In the U.S. the incidence of obesity, has more than doubled over the last 35 years to currently around 35% of the population, while two thirds of the population are considered overweight or obese (Body Mass Index; BMI > 25).

Obviously, there is a need for effective treatments to prevent or treat obesity. But, despite copious research and a myriad of dietary and exercise programs, there still is no safe and effective treatment. Mindfulness is known to be associated with lower risk for obesity, alter eating behavior and improve health in obesity.

In today’s Research News article “Less Binge Eating and Loss of Control over Eating Are Associated with Greater Levels of Mindfulness: Identifying Patterns in Postmenopausal Women with Obesity.” (See summary below or view the full text of the study at: https://www.ncbi.nlm.nih.gov/pmc/articles/PMC6523377/), Smith and colleagues recruited obese postmenopausal women (aged 45-65 years). They were measured for mindfulness, eating disorders, and control of eating.

These results are correlational and causation cannot be concluded. But prior studies have shown that mindfulness training reduces the levels of eating disorders. So, it is likely that the current results resulted from this causal relationship. This study demonstrates that the eating disorder of binge eating is related to low levels of mindfulness in postmenopausal obese women and this is also related to loss of control over eating. This suggests that training in mindfulness may be helpful to these women in establishing control of their eating and reduce binge eating.

So, improve eating control and binge eating with mindfulness.

“By taking more conscious control over what, how and when you binge you increase your ability to control your behaviors and to make better dietary choices in general.” – John Lee

Obesity is a public health concern resulting in widespread personal, social, and economic burden. Many individuals with obesity report feeling unable to stop eating or to control their food intake (i.e., a loss of control over eating) despite their best efforts. Experiencing loss of control over eating predicts further eating pathology and is a key feature of binge eating. Mindfulness (i.e., awareness and acceptance of current thoughts, feelings, sensations, and surrounding events) has emerged as a potential strategy to treat such eating disorder behaviors, but it is not known whether there is merit in investigating this strategy to address binge eating in postmenopausal women with obesity. Thus, this study aimed to examine the relationships between binge eating and mindfulness in postmenopausal women with obesity seeking weight loss treatment. Participants (n = 101) were assessed with the Eating Disorder Examination Questionnaire, the Loss of Control over Eating Scale, the Five-Facet Mindfulness Questionnaire, and the Langer Mindfulness Scale. Participants´ overall scores on both mindfulness scales were significantly and negatively correlated with binge eating frequency or the severity of loss of control over eating. Moreover, participants who reported fewer binge eating episodes were significantly more mindful than those who reported greater frequencies of binge eating episodes within the past 28 days. These findings suggest a merit in investigating the use of mindfulness-based therapies to treat binge eating in postmenopausal women with obesity.