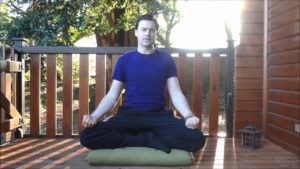 A system of the brain known as the Default Mode Network (DMN) becomes active during wind wandering and relatively quiet during focused on task behavior. Meditation is known to reduce the size, connectivity, and activity of the Default Mode Network (DMN).  Hence, brain activity may help identify mind wandering when it occurs. Eye movements occur even when the eyes are closed and during meditation. They may also be indicators of mind wander in during meditation.

In today’s Research News article “Spontaneous eye movements during focused-attention mindfulness meditation.” (See summary below or view the full text of the study at: https://www.ncbi.nlm.nih.gov/pmc/articles/PMC6345481/), Matiz and colleagues recruited adult experienced meditators. They engaged in a 7-minute focused breath meditation or a 7-minute mind wandering where they were asked to “remember or imagine one or more events of their past or future in which they, or another person, were the protagonist.” During the session brain activity, the electroencephalogram (EEG), was recorded. They derived a measure from the EEG that indicated vertical and horizontal eye movements. They also measured the total amount of meditation experience for each participant.

They found that during the 7-minutes of mind wandering there were significantly more eye movements, including both vertical and horizontal movements, than during the7-minutes of  focused meditation. In addition, they found that the more meditation experience that the meditator had, the fewer the eye movements that were recorded under both conditions. Hence, experienced meditators not only move their eyes less during meditation and but also during mind wandering.

These are interesting findings that suggest that analysis of the brain’s electrical activity, electroencephalogram (EEG), may be able to detect when mind wandering is occurring during meditation. This could lead to the possibility of providing biofeedback to the meditator when the mind is wandering, lessening the amount of mind wandering and thereby deepening the meditative experience. This is an intriguing possibility for future research.

“When the mind becomes steady in meditation, the eyeballs also become steady. A Yogi whose mind is calm will have a steady eye. “ – Swami Sivananda