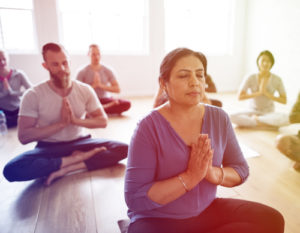 “Is mindfulness better than medication or other therapies? No, probably not; But if you are someone who doesn’t believe in taking medication or seeing an individual therapist you might be more inclined to engage in the practice of mindfulness. So, it becomes, ‘OK, we have a modality that people like, it’s appealing and accessible to them, so they’re more motivated to use it.’ [In that case] mindfulness may work better for them.” – Patricia Rockman

There are vast numbers of people who suffer with mental illnesses. In the United states it has been estimated that in any given year 1 in 5 people will experience a mental illness. Many are treated with drugs. But drug treatment can produce unwanted side effects, don’t work for many patients, and often can lose effectiveness over time. Mindfulness practices provide a safe alternative treatment. They have been found to be helpful with coping with these illnesses and in many cases reducing the symptoms of the diseases. Hence, it appears that mindfulness practices are safe and effective treatments for a variety of psychiatric conditions including anxiety, depression, psychoses, addictions, etc..

The research is accumulating. Hence it makes sense to step back and summarize what has been learned regarding the effectiveness of mindfulness-based treatments for psychiatric conditions. In today’s Research News article “Mindfulness-based interventions for psychiatric disorders: A systematic review and meta-analysis.” (See summary below or view the full text of the study at: https://www.ncbi.nlm.nih.gov/pmc/articles/PMC5741505/), Goldberg and colleagues review, summarize, and perform a meta-analysis of the effectiveness of mindfulness-based treatments for psychiatric conditions. They examined randomized controlled trials that employed mindfulness trainings that included meditation practice and home practice. Any psychiatric disorder, including schizophrenia, addictions, eating disorders, anxiety, smoking and chronic pain, were included with depression the most frequently studied. They identified 142 randomized controlled trials that included a total of 12,005 participants.

They found that mindfulness treatments produced significantly greater improvements in psychiatric symptoms than no-treatment control conditions, minimal treatment, non-specific active, and specific active control conditions. They also found that mindfulness treatments produced equivalent improvements in psychiatric symptoms, when compared to evidence-based treatments such as cognitive behavioral therapy (CBT) and drugs. These effects were present immediately after treatment and at follow-up on average 6.43 months after the conclusion of treatment.

These results are remarkable. Mindfulness treatments were found to be safe, effective, and lasting for a wide variety of psychiatric disorders and as effective as recognized evidenced based treatments including drug treatments. It is amazing that such a simple and safe treatment could be effective for such a range of disorders, virtually any disorder. How this could be possible is not known, and should be a focus of future research. But focusing on the present moment would appear to an important mechanism for redirecting thinking away from the focus on past and future that appears to produce stress and exacerbate the disorders.

So, improve psychiatric disorders with mindfulness.

“While mindfulness might seem unconventional, it’s an increasingly accepted method of achieving a healthier mind. Therapists who teach mindfulness techniques to their clients do so to help them cope with mental health challenges and strive for a sense of peace.” – Faith Onimiya