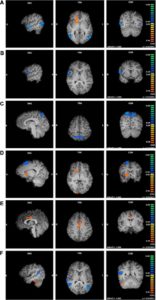 Change Brain Connectivity for Better Attention and Thinking with Mindfulness

There has accumulated a large amount of research demonstrating that mindfulness has significant benefits for psychological, physical, and spiritual wellbeing. It even improves high level thinking known as executive function and emotion regulation and compassion. Its positive effects are so widespread that it is difficult to find any other treatment of any kind with such broad beneficial effects on everything from thinking to mood and happiness to severe mental and physical illnesses. This raises the question of how mindfulness training could produce such widespread and varied benefits. One possibility is that mindfulness practice results in beneficial changes in the nervous system.

The nervous system is a dynamic entity, constantly changing and adapting to the environment. It will change size, activity, and connectivity in response to experience. These changes in the brain are called neuroplasticity. Over the last decade neuroscience has been studying the effects of contemplative practices on the brain and has identified neuroplastic changes in widespread areas. In other words, mindfulness practice appears to mold and change the brain, producing psychological, physical, and spiritual benefits. The changes are complex and require sophisticated brain scanning techniques to detect. Hence there is a need to continue investigating the nature of these changes in the brain produced by meditation.

In today’s Research News article “Trait Mindfulness and Functional Connectivity in Cognitive and Attentional Resting State Networks.” (See summary below or view the full text of the study at: https://www.ncbi.nlm.nih.gov/pmc/articles/PMC6473082/), Parkinson and colleagues recruited undergraduate students who had never meditated, measured them for mindfulness, and scanned their brains under resting conditions with functional Magnetic Resonance Imaging (fMRI). They examined the functional connectivity of a number of established neural networks and their relationship with mindfulness.

So, change brain connectivity for better attention and thinking with mindfulness.

“Just 11 hours of learning a meditation technique induce positive structural changes in brain connectivity by boosting efficiency in a part of the brain that helps a person regulate behavior in accordance with their goals,” – University of Oregon

Mindfulness has been described as an orienting of attention to the present moment, with openness and compassion. Individuals displaying high trait mindfulness exhibit this tendency as a more permanent personality attribute. Given the numerous physical and mental health benefits associated with mindfulness, there is a great interest in understanding the neural substrates of this trait. The purpose of the current research was to examine how individual differences in trait mindfulness associated with functional connectivity in five resting-state networks related to cognition and attention: the default mode network (DMN), the salience network (SN), the central executive network (CEN), and the dorsal and ventral attention networks (DAN and VAN). Twenty-eight undergraduate participants completed the Five-Facet Mindfulness Questionnaire (FFMQ), a self-report measure of trait mindfulness which also provides scores on five of its sub-categories (Observing, Describing, Acting with Awareness, Non-judging of Inner Experience, and Non-reactivity to Inner Experience). Participants then underwent a structural MRI scan and a 7-min resting state functional MRI scan. Resting-state data were analyzed using independent-component analyses. An analysis of covariance (ANCOVA) was performed to determine the relationship between each resting state network and each FFMQ score. These analyses indicated that: (1) trait mindfulness and its facets showed increased functional connectivity with neural regions related to attentional control, interoception, and executive function; and (2) trait mindfulness and its facets showed decreased functional connectivity with neural regions related to self-referential processing and mind wandering. These patterns of functional connectivity are consistent with some of the benefits of mindfulness—enhanced attention, self-regulation, and focus on present experience. This study provides support for the notion that non-judgmental attention to the present moment facilitates the integration of regions in neural networks that are related to cognition, attention, and sensation.