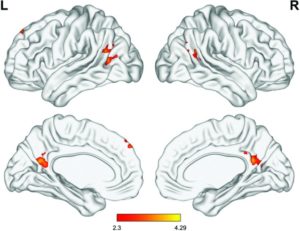 Change the Brain to Improve Resilience with Meditation

“Mindful people … can better cope with difficult thoughts and emotions without becoming overwhelmed or shutting down (emotionally). Pausing and observing the mind may (help us) resist getting drawn into wallowing in a setback.” – Badri Bajaj

Psychological well-being is sometimes thought of as a lack of mental illness. But it is more than just a lack of something. It is a positive set of characteristics that lead to happy, well-adjusted life. These include the ability to be aware of and accept one’s strengths and weaknesses, to have goals that give meaning to life, to truly believe that your potential capabilities are going to be realized, to have close and valuable relations with others, the ability to effectively manage life issues especially daily issues, and the ability to follow personal principles even when opposed to society. But stress can interfere with the individual’s ability to achieve these goals.  When highly stressed, resilience is required to cope with the stress and continue on the path to psychological well-being.

One way that mindfulness practices such as meditation may improve resilience is by altering the brain. The nervous system is a dynamic entity, constantly changing and adapting to the environment. It will change size, activity, and connectivity in response to experience. These changes in the brain are called neuroplasticity. Over the last decade neuroscience has been studying the effects of contemplative practices on the brain and has identified neuroplastic changes in widespread areas. In other words, mindfulness practice appears to mold and change the brain, producing psychological, physical, and spiritual benefits. The changes in the brain, however, that are responsible for increased resilience are unknown.

In today’s Research News article “The Immediate and Sustained Positive Effects of Meditation on Resilience Are Mediated by Changes in the Resting Brain.” (See summary below or view the full text of the study at: https://www.ncbi.nlm.nih.gov/pmc/articles/PMC6448020/), Kwak and colleagues recruited healthy adults to participate in a 4-day retreat. They were randomly assigned to a meditation retreat or a relaxation retreat. They were measured before and after the retreat and 3 months later for mindfulness, resilience, and religious preference. Also, before and after the retreat the participants underwent functional Magnetic Resonance Imaging (f-MRI) of their brains.

The results are interesting and suggest that the effect of meditation on resilience is due to increases in mindfulness that change the brain to produce greater resilience. In particular, meditation appears to increase the functional connectivity between brain regions, the cingulate cortex and the prefrontal cortex and the precuneus, and angular gyrus, and thus is partially responsible for increased resilience.

Resilience is very important for the individual to be able to withstand the stress and negative events in life. Meditation appears to change the brain to help people better cope with the stresses of life. This may underlie, at least in part, the psychological and physical benefits of meditation practice.

So, change the brain to improve resilience with meditation.

“The emotional soup that follows a stressful event can whip up negative stories about yourself or others that goes on and on, beyond being useful. Mindfulness reduces this rumination and, if practiced regularly, changes your brain so that you’re more resilient to future stressful events.” – Shamash Alidina

While recent studies have explored the maintenance of the effect of meditation on stress resilience, the underlying neural mechanisms have not yet been investigated. The present study conducted a highly controlled residential study of a 4-day meditation intervention to investigate the brain functional changes and long-term effects of meditation on mindfulness and resilience. Thirty participants in meditation practice and 17 participants in a relaxation retreat (control group) underwent magnetic resonance imaging scans at baseline and post-intervention and completed the Cognitive and Affective Mindfulness Scale (CAMS) and Resilience Quotient Test (RQT) at baseline, post-intervention, and the 3-month follow-up. All participants showed increased CAMS and RQT scores post-intervention, but only the meditation group sustained the enhancement after 3 months. Resting-state functional connectivity (rsFC) between the left rostral anterior cingulate cortex (rACC) and the dorsomedial prefrontal cortex (dmPFC), precuneus, and angular gyrus was significantly increased post-intervention in the meditation group compared with the relaxation group. The changes in rACC-dmPFC rsFC mediated the relationship between the changes in the CAMS and RQT scores and correlated with the changes in the RQT score both immediately and at 3 months post-intervention. Our findings suggest that increased rACC-dmPFC rsFC via meditation causes an immediate enhancement in resilience that is sustained. Since resilience is known to be associated with the preventative effect of various psychiatric disorders, the improvement in stress-related neural mechanisms may be beneficial to individuals at high clinical risk.