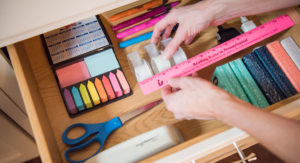 “To be able to focus on what is really happening in any given moment, as opposed to dwelling on the past or anticipating the future, takes away the power of OCD.” – Janet Singer

Obsessive-Compulsive Disorder (OCD) sufferer have repetitive anxiety producing intrusive thoughts (obsessions) that result in repetitive behaviors to reduce the anxiety (compulsions). In a typical example of OCD, the individual is concerned about germs and is unable to control the anxiety that these thoughts produce. Their solution is to engage in ritualized behaviors, such as repetitive cleaning or hand washing that for a short time relieves the anxiety. The obsessions and compulsions can become so frequent that they become a dominant theme in their lives. Hence OCD drastically reduces the quality of life and happiness of the sufferer and those around them. About 2% of the population, 3.3 million people in the U.S., are affected at some time in their life.

Fortunately, OCD can be treated and Mindfulness training has been shown to be effective in treating OCD. In addition, changing the maladaptive thought processes occurring in OCD through Cognitive Restructuring (CR) has also been shown to be effective. In today’s Research News article “A randomized waitlist-controlled trial comparing detached mindfulness and cognitive restructuring in obsessive-compulsive disorder.” (See summary below or view the full text of the study at: https://www.ncbi.nlm.nih.gov/pmc/articles/PMC6426247/), Rupp and colleagues compare the effectiveness of mindfulness training and cognitive restructuring in treating Obsessive-Compulsive Disorder (OCD).

They recruited patients with Obsessive-Compulsive Disorder (OCD) and randomly assigned them to receive either cognitive restructuring or detached mindfulness training or to a wait-list control condition. The treatments were delivered in 100-minute sessions, twice a week for two weeks and contained homework assignments. Cognitive restructuring targets distorted thinking that underlies OCD and teaches the patient to observe the thoughts and question the appraisals produced by the thoughts. Detached mindfulness training also targets the distorted thinking that underlies OCD but teaches the patient to observe the thoughts and detach from them, see them as separate from themselves. They were measured before and after training and 4 weeks later for intelligence, depression, psychological disorders, and Obsessive-Compulsive Disorder (OCD) symptoms.

They found that compared to baseline and the wait-list control group both treatments resulted in significant reductions in OCD symptoms that were clinically significant and maintained at the 4-week follow-up. There were also small deceases in depression levels in the patients after both treatments. Hence, both treatments improved the symptoms of patients suffering from Obsessive-Compulsive Disorder (OCD). Hence brief training in cognitive restructuring or detached mindfulness are effective in treating OCD symptoms.

It has previously been demonstrated that Mindfulness training is effective in treating OCD. The current study suggests that an unusual mindfulness technique, detached mindfulness, may also be effective. It appears that very different types of treatments, cognitive restructuring and detached mindfulness are effective in treating the symptoms of Obsessive-Compulsive Disorder (OCD). The control condition, however, received no treatment. So, it is possible that the improvements observed may have been due to subject expectancy effects (placebo effects) and not to the treatments. Future research should include placebo control conditions.

So, improve obsessive-compulsive disorder with mindfulness.

“a person trapped by an endless cycle of washing, checking, or cleaning is experiencing exactly the same struggle with accepting thoughts, feelings, and sensations as people with intrusive thoughts.  So, mindfulness is really for anyone who wants to stop feeling like what is going on inside their mind is a burden.  It’s hard to imagine anyone with OCD who would wish to continue feeling that way.” – John Hershfield

In both conditions, treatment comprised four double sessions within two weeks. Assessment took place at baseline (Pre1), after treatment (Post) and four weeks after the end of treatment (FU). There was a second baseline assessment (Pre2) in the waitlist group. Independent evaluators were blinded concerning the active condition. Adherence and competence ratings for the two therapists were obtained from an independent rater.

40 patients completed the treatment. Two patients dropped out because of exacerbated depression. There were no further adverse events. Both CR and DM were shown to be superior to waitlist and equally effective at reducing OCD symptoms from pre to post assessment as measured with the Y-BOCS (CR: d = 1.67, DM: d = 1.55). In each of the two treatment conditions, eight patients (40%) exhibited a clinical significant change at post assessment.

The results of this clinical trial suggest the potential efficacy of DM as a stand-alone intervention for OCD, however, our findings need to be interpreted with caution. Results indicate that both CR and DM should be considered as possible alternative treatments for OCD, whereas the working mechanisms of DM have yet to be elucidated.