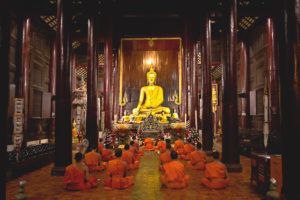 Affect the Brain with Religious Chanting

“According to a recent medical report, chanting Om has been associated with reducing stress. One of the biggest health benefits of Om chanting is that it brings down stress levels. It provides relief from anxiety and tension. Regular chanting ensures that you feel peaceful from within and are less distracted while doing any form of work.” – Pavankumar elkoochi

The nervous system is a dynamic entity, constantly changing and adapting to the environment. It will change size, activity, and connectivity in response to experience. These changes in the brain are called neuroplasticity.  Over the last decade neuroscience has been studying the effects of contemplative practices on the brain and has identified neuroplastic changes in widespread area. and have found that meditation practice appears to mold and change the brain, producing psychological, physical, and spiritual benefits. What changes in the brain that may occur with chanting are not known.

In today’s Research News article “The neurophysiological correlates of religious chanting.” (See summary below or view the full text of the study at: https://www.ncbi.nlm.nih.gov/pmc/articles/PMC6414545/), Gao and colleagues recruited participants who practiced Buddhist chanting for at least one year for 15 minutes per day. The participants were measured for brain electrical activity with the electroencephalogram (EEG) and for cardiac activity with an electrocardiogram (ECG) under 3 conditions, rest, silent Buddhist chanting (religious chanting), and silent chanting Santa Claus (non-religious chanting). One Buddhist monk who had spent years chanting underwent a function Magnetic Resonance Imaging (fMRI) brain scan under similar conditions.

These findings are very interesting and suggest that religious chanting has specific effects upon the brain and peripheral nervous system that might explain some of the benefits of this chanting. The lowered cardiac power suggests relaxation and a predominance of the parasympathetic division of the autonomic nervous system. This could in part be responsible for anti-stress effects of meditation practice.

The posterior cingulate cortex has been shown through multiple lines of evidence to be involved in self-referential thinking. Delta frequency waves are associated with reduced actual activity as they are increased during light sleep. Hence the results suggest that religious chanting suppresses thinking about the self. This is exactly what most meditation practices attempt to do. The results, then suggest that religious chanting is an effective contemplative practice in altering the brain activity to reduce self-referential thinking and peripheral nervous system activity to increase relaxation.

So, affect the brain with religious chanting.

“Mantras give the wandering mind a focal point. They produce a beat and a flow that is easy for the mind and body’s energy system to grasp a hold of. When the mind wants to wander out of the meditative state, the mantra helps bring it back.” – EOC

Despite extensive research on various types of meditation, research on the neural correlates of religious chanting is in a nascent stage. Using multi-modal electrophysiological and neuroimaging methods, we illustrate that during religious chanting, the posterior cingulate cortex shows the largest decrease in eigenvector centrality, potentially due to regional endogenous generation of delta oscillations. Our data show that these functional effects are not due to peripheral cardiac or respiratory activity, nor due to implicit language processing. Finally, we suggest that the neurophysiological correlates of religious chanting are likely different from those of meditation and prayer, and would possibly induce distinctive psychotherapeutic effects.