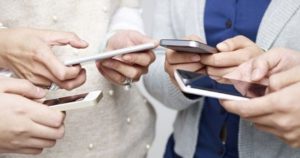 “With its emphasis on harnessing attention with intention (i.e. redirecting it on purpose), mindfulness—with all its scientifically-established health and well-being benefits—has the potential to keep us from drifting hopelessly away from one another. Perhaps it can keep us connected, even though we might only be feet away from one another as we tap out texts, emails ,or check up on our “social” life on social media.” – Mitch Abblett

Over the last few decades cell phones have gone from a rare curiosity to the dominant mode of electronic communications. They have also expanded well beyond a telephone and have become powerful hand-held computers known as smartphones. In fact, they have become a dominant force in daily life, occupying large amounts of time and attention. We have become seriously attached. They have become so dominant that, for many, the thought of being without it produces anxiety. Many people have become addicted. It is estimated that about 12% of the population is truly “addicted,” developing greater levels of “tolerance” and experiencing “withdrawal” and distress when deprived of them.

Recent surveys and studies paint a vivid picture of our cell phone addiction: we feel a surge of panic when we are separated from our beloved cell phones. This phenomenon is so new that there is little understanding of its nature and causes. In today’s Research News article “.” (See summary below or view the full text of the study at: https://www.frontiersin.org/articles/10.3389/fpsyg.2019.00598/full?utm_source=F-AAE&utm_medium=EMLF&utm_campaign=MRK_943967_69_Psycho_20190326_arts_A), Li and colleagues examine the relationships of parental attachment, alexithymia, and mindfulness with cell phone dependence in adolescents. They recruited adolescents (average age 14.9 years) and had them complete scales measuring parental attachment, alexithymia, mindfulness, and mobile phone dependence.

These findings suggest that youth with secure attachment to their parents become less dependent on their mobile phones and that this association is strengthened by mindfulness. In other words, mindful youths are more highly impacted by their attachment to their parents. Alexithymia “is characterized by reduced capacity to identify, analyze and express emotions, restricted imagination, and an externally oriented thinking.” Hence, the findings also suggest that youth with poor emotion regulation become more attached to the mobile phones and that mindful youths are less impacted by their lack of emotion regulation. So, mindfulness is associated with lower dependence on mobile phones by moderating the associations of parental attachment and alexithymia on mobile phone dependence.

Since mobile phone dependence is becoming more and more of a problem it is important to find antidotes. Mindfulness may be just such an antidote. The present results, though, are correlational and causation cannot be determined. So, it remains to be seen if mindfulness training can, in fact, alter the relationships of parental attachment and alexithymia with mobile phone dependence. This will be important to determine in the future as mindfulness training may be used to lower the dependence of youths on mobile phones and thereby improve their connections with other people and their environment, improving their well-being.

So, reduce cell phone dependence in adolescents with mindfulness.

“To say we are addicted to our phones is not merely to point out that we use them a lot. It signals a darker notion: that we use them to keep our own selves at bay. Because of our phones, we may find ourselves incapable of sitting alone in a room with our own thoughts floating freely in our own heads, daring to wander into the past and the future, allowing ourselves to feel pain, desire, regret and excitement.” – Stephany Tlalka

Mobile phone has experienced a significant increase in popularity among adolescents in recent years. Findings indicate dependence on mobile phone is related to poor parent-child relationship. However, previous research on mobile phone dependence (MPD) is scant and mainly focus on adult samples. In this view, the present study investigated the association between parental attachment and MPD as well as its influence mechanism, in sample of adolescents in rural China. Data were collected from three middle schools in rural areas of Jiangxi and Hubei Province (N = 693, 46.46% female, Mage = 14.88, SD = 1.77). Participants completed the Inventory of Parent and Peer Attachment (IPPA), the twenty-item Toronto alexithymia scale (TAS-20), the Mindful Attention Awareness Scale (MAAS) and the Mobile Phone Addiction Index Scale (MPAI). Among the results, parental attachment negatively predicted MPD and alexithymia were exerting partial mediation effect between parental attachment and MPD. Further, mindfulness acted as moderator of the relationship between alexithymia and MPD: The negative impact of alexithymia on MPD was weakened under the condition of high level of mindfulness. Knowledge of this mechanism could be useful for understanding adolescents’ MPD in terms of the interaction of multiple factors.