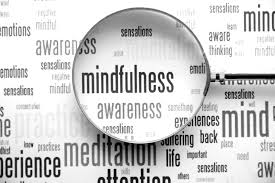 Improved Executive Attention with Mindfulness is Mediated by Brain Processing

“With practice, we can strengthen the part of our brain that helps focus and sustain attention. Building that strength has enormous payoffs in performance, relationships and a sense of well-being.” – Laurie Cameron

One of the primary effects of mindfulness training is an improvement in the ability to pay attention to the task at hand and ignore interfering stimuli. This is an important consequence of mindfulness training and produces improvements in thinking, reasoning, and creativity. The importance of heightened attentional ability to the individual’s ability to navigate the demands of complex modern life cannot be overstated. It helps in school, at work, in relationships, or simply driving a car. As important as attention is, it’s surprising that little is known about the mechanisms by which mindfulness improves attention

One method to observe attentional processing in the brain is to measure the changes in the electrical activity that occur in response to specific stimuli. These are called event-related potentials or ERPs. The signal following a stimulus changes over time. The fluctuations of the signal after specific periods of time are thought to measure different aspects of the nervous system’s processing of the stimulus. The P3 response in the evoked potential (ERP) is a positive going electrical response occurring between a 2.5 to 5 tenths of a second following the target stimulus presentation. The P3 component is thought to reflect attentional processing.

In today’s Research News article “). Clarifying the relationship between mindfulness and executive attention: A combined behavioral and neurophysiological study.” (See summary below or view the full text of the study at: https://www.ncbi.nlm.nih.gov/pmc/articles/PMC6374600/), Lin and colleagues recruited female college students who did not have a mindfulness practice and measured their trait mindfulness and tested them for attention with a flanker task where the participant had to respond to a stimulus and ignore irrelevant but distracting material. During the task the Electroencephalogram (EEG) was recorded and the brain electrical response to the stimulus recorded (ERP).

They found that the higher the level of the student’s mindfulness the better they performed on the flanker task, indicating better executive attention. Also, the higher the level of mindfulness, the smaller the P3 component in the event-related potential (ERP) when highly distracting flanker material was present. Mediation analysis revealed that mindfulness was associated by better performance both directly by being associated with fewer errors and also indirectly by being associated with a smaller P3 component in the ERP which, in turn, was associated with fewer errors.

These results suggest that mindfulness is associated with better executive attention allowing the individual to better ignore distractions. It appears to do so in two ways, directly and also by influencing a brain mechanism that heightens attention. This is an important benefit of mindfulness as better attentional ability is important for virtually every aspect of life from school performance to social interactions. This study suggests that a brain mechanism may, in part, be responsible for this important benefit of mindfulness.