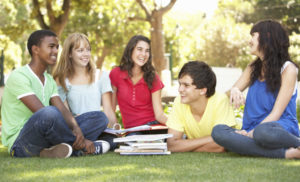 Promote Well-Being in Adolescents with Spirituality

“Call it faith. Call it spirituality. Call it zealotry. Our consciousness creates the reality that reflects it. If we feel apart, other, afraid, and deadened, we will live in a world that reflects and perpetuates these energies.” – Kelly Brogan

Spirituality is defined as “one’s personal affirmation of and relationship to a higher power or to the sacred. ”Spirituality has been promulgated as a solution to the challenges of life both in a transcendent sense and in a practical sense. The transcendent claims are untestable with the scientific method. But the practical claims are amenable to scientific analysis. There have been a number of studies of the influence of spirituality on the physical and psychological well-being of practitioners mostly showing positive benefits, with spirituality encouraging personal growth and mental health.

It makes sense, then, to investigate the influence of spirituality on the ability of youths to navigate this difficult time and develop positive qualities and better mental health. In today’s Research News article “A Longitudinal Study of Spirituality, Character Strengths, Subjective Well-Being, and Prosociality in Middle School Adolescents.” (See summary below or view the full text of the study at: https://www.frontiersin.org/articles/10.3389/fpsyg.2019.00377/full?utm_source=F-AAE&utm_medium=EMLF&utm_campaign=MRK_925884_69_Psycho_20190305_arts_A ), Kor and colleagues recruited adolescents aged 13 to 17 years and had them complete scales at baseline and 3 and 14 months later measuring character strength, optimism, spirituality, religiosity, transcendence, devotion, positive and negative emotions, life satisfaction, and prosociality.

These findings are interesting but correlational. So, conclusions regarding causation cannot be reached. But the findings suggest that, surprisingly, spirituality does not fluctuate greatly over time in adolescents. They also suggest that spirituality is associated with a relatively satisfying and happy life that is engaged positively with other people. Hence, spirituality would appear to be a positive factor that is helpful to youths in maintaining well-being over the turbulent time of adolescence.

So, promote well-being in adolescents with spirituality.