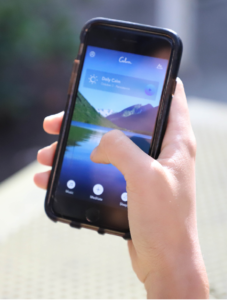 “Mobile phones are often scorned as devices of distraction, but paradoxically, they may serve as a good platform to practice being in the moment and being mindful given their wide use,” – Jayde Flett

Mindfulness training has been shown through extensive research to be effective in improving physical and psychological health and particularly with the physical and psychological reactions to stress and resilience in the face of stress. The vast majority of the mindfulness training techniques, however, require a trained therapist. This results in costs that many clients can’t afford. In addition, the participants must be available to attend multiple sessions at particular scheduled times that may or may not be compatible with their busy schedules and at locations that may not be convenient. As an alternative, Apps for smartphones have been developed. These have tremendous advantages in decreasing costs, making training schedules much more flexible, and eliminating the need to go repeatedly to specific locations. But the question arises as to the effectiveness of these Apps in inducing mindfulness and improving psychological health.

In today’s Research News article “). Effects of a Mindfulness Meditation App on Subjective Well-Being: Active Randomized Controlled Trial and Experience Sampling Study.” (See summary below or view the full text of the study at: https://www.ncbi.nlm.nih.gov/pmc/articles/PMC6329416/ ), Walsh and colleagues recruited undergraduate students and randomly assigned them to practice with one of two smartphone apps, “Wildflowers” Mindfulness Training or “2048” Cognitive Training, for 10 minutes per day for three weeks. “2048” is described as “fun and relaxing puzzle game”. “Wildflowers” involves a variety of meditation trainings. “Ratings of current mood, stress level, and heart rate were recorded within each app before and after each training session.” Also, before and after the 3 weeks of training with the Apps the participants completed online measures of perceived stress, personality, well-being, psychological inflexibility, experiential avoidance, mindfulness, interoceptive awareness, spirituality, meaning in life, attentional control, interoceptive attention, and positive and negative mood.

They found that in comparison to the before session mood and the cognitive training group, after the session the participants who engaged in mindfulness training had significantly improved mood and reduced perceived stress. Hence, on the short term, engagement with the mindfulness app improved the emotional state of the participants.

This research is well structured as the control, comparison, condition involved an equivalent amount of practice, time commitment, and expectation of benefit. So, the findings can be viewed as solid. The study, however, lacks a follow-up to determine if the effects are lasting or fleeting. The results though demonstrate that engaging in mindfulness practices with a smartphone produces short-term benefits for the individual’s emotional and psychological state and attentional ability. These are substantial benefits for a 10 minute per day investment of time. The low cost, scalability, flexibility, and convenience of training using a smartphone make it an important advance in mindfulness training.

So, improve psychological well-being with a smartphone mindfulness app.

“Mindfulness does not mean avoiding digital media, nor does it mean making one’s own mindfulness dependent on it – so let’s be more mindful when it comes to mindfulness!” – Annika Heinemeyer

Mindfulness training (MT) includes a variety of contemplative practices aimed at promoting intentional awareness of experience, coupled with attitudes of nonjudgment and curiosity. Following the success of 8-week, manualized group interventions, MT has been implemented in a variety of modalities, including smartphone apps that seek to replicate the success of group interventions. However, although smartphone apps are scalable and accessible to a wider swath of population, their benefits remain largely untested.

This study aimed to investigate a newly developed MT app called Wildflowers, which was codeveloped with the laboratory for use in mindfulness research. It was hypothesized that 3 weeks of MT through this app would improve subjective well-being, attentional control, and interoceptive integration, albeit with weaker effects than those published in the 8 week, manualized group intervention literature.

Analyses revealed both state and trait effects specific to MT; participants engaging in MT demonstrated improved mood (r=.14) and a reduction of stress (r=−.13) immediately after each training session compared with before the training session and decreased postsession stress over 3 weeks (r=−.08). In addition, MT relative to cognitive training resulted in greater improvements in attentional control (r=−.24). Interestingly, both groups demonstrated increased subjective ratings of awareness (r=.28) and acceptance (r=.23) from pre- to postintervention, with greater changes in acceptance for the MT group trending (r=.21).

MT, using a smartphone app, may provide immediate effects on mood and stress while also providing long-term benefits for attentional control. Although further investigation is warranted, there is evidence that with continued usage, MT via a smartphone app may provide long-term benefits in changing how one relates to their inner and outer experiences.