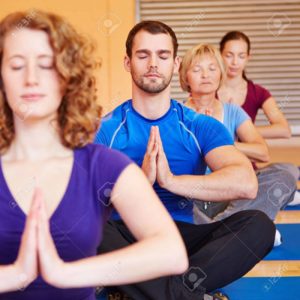 “yoga does in fact have positive effects on mild depression and sleep problems, and it improves the symptoms of psychiatric disorders like schizophrenia and ADHD among patients using medication.” – Alexandra Sifferin

Psychoses are mental health problems that cause people to perceive or interpret things differently from those around them. This might involve hallucinations; seeing and, in some cases, feeling, smelling or tasting things that aren’t objectively there, or delusions; unshakable beliefs that, when examined rationally, are obviously untrue. The combination of hallucinations and delusional thinking can often severely disrupt perception, thinking, emotion, and behavior, making it difficult if not impossible to function in society without treatment. Psychoses appear to be highly heritable and involves changes in the brain. Psychoses are very difficult to treat with psychotherapy and are usually treated with antipsychotic drugs. These drugs, however, are not always effective, sometimes lose effectiveness, and can have some difficult side effects. Hence, there is a need for safe and effective alternative treatments for psychosis.

They report that the research finds that both mindfulness practices and yoga practice in combination with antipsychotic medications significantly reduces both the positive and negative symptoms of schizophrenia and other psychotic disorders, improves the patient’s ability to effectively engage in everyday activities and also improves higher level thought processes, cognition. With Bipolar Disorder they report that there are only a very small number of studies that suggest improvements but more research is needed. With Major Depressive Disorders both mindfulness and yoga practices have been shown to produce significant reductions in depression alone or in combination with anti-depressive medications.

Hence, they find that the current published research supports the use of either mindfulness or yoga practices for the treatment of severe mental illnesses. There is clearly a need for more research, but the studies to date are very encouraging. They suggest that these practices are safe and effective whether used alone or in combination with drugs and may then be a needed alternative treatment to drugs.

So, improve severe mental illness with yoga and mindfulness.

“Yoga can be an incredible tool for self-growth, empowerment, healing, and health for those with mental disorders.” – Zoie Kanakis

Sathyanarayanan, G., Vengadavaradan, A., & Bharadwaj, B. (2019). Role of Yoga and Mindfulness in Severe Mental Illnesses: A Narrative Review. International journal of yoga, 12(1), 3-28.

Yoga has its origin from the ancient times. It is an integration of mind, body, and soul. Besides, mindfulness emphasizes focused awareness and accepting the internal experiences without being judgemental. These techniques offer a trending new dimension of treatment in various psychiatric disorders.

We aimed to review the studies on the efficacy of yoga and mindfulness as a treatment modality in severe mental illnesses (SMIs). SMI includes schizophrenia, major depressive disorder (MDD), and bipolar disorder (BD).

We found that asanas and pranayama are the most commonly studied forms of yoga for schizophrenia. These studies found a reduction in general psychopathology ratings and an improvement in cognition and functioning. Some studies also found modest benefits in negative and positive symptoms. Mindfulness has not been extensively tried, but the available evidence has shown benefits in improving psychotic symptoms, improving level of functioning, and affect regulation. In MDD, both yoga and mindfulness have demonstrated significant benefit in reducing the severity of depressive symptoms. There is very sparse data with respect to BD.

Both yoga and mindfulness interventions appear to be useful as an adjunct in the treatment of SMI. Studies have shown improvement in the psychopathology, anxiety, cognition, and functioning of patients with schizophrenia. Similarly, both the techniques have been established as an effective adjuvant in MDD. However, more rigorously designed and larger trials may be necessary, specifically for BD.