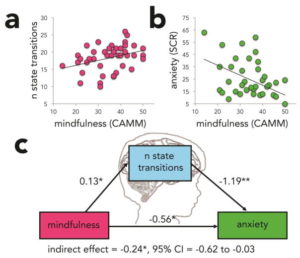 Mindfulness is Associated with Changing Neural Connectivity in Children and Adolescents

There has accumulated a large amount of research demonstrating that mindfulness has significant benefits for psychological, physical, and spiritual wellbeing. It even improves high level thinking known as executive function. Its positive effects are so widespread that it is difficult to find any other treatment of any kind with such broad beneficial effects on everything from thinking to mood and happiness to severe mental and physical illnesses. This raises the question of how mindfulness training could produce such widespread and varied benefits. One possibility is that mindfulness practice results in beneficial changes in the nervous system.

The nervous system is a dynamic entity, constantly changing and adapting to the environment. It will change size, activity, and connectivity in response to experience. These changes in the brain are called neuroplasticity. Over the last decade neuroscience has been studying the effects of contemplative practices on the brain and has identified neuroplastic changes in widespread areas. In other words, mindfulness practice appears to mold and change the brain, producing psychological, physical, and spiritual benefits.

The children and adolescents then had their brains scanned with functional Magnetic Imaging (fMRI). The scans were evaluated for static connectivity, the relatively permanent connections between brain areas, and dynamic connectivity, the changing connections between areas. They looked specifically at 3 systems in the brain, the central executive network, associated with higher level thinking and attention, the salience and emotion network, associate with the importance of stimuli, and the default mode network, associated with mind wandering and self-referential thinking.

The results suggest that mindfulness is associated with greater brain flexibility in transitioning from different states and this may allow for less anxiety. This suggests that mindfulness allows for greater ability to see things and evaluate what is occurring in different ways and this helps the youths to better appreciate what is happening and thereby lower anxiety. These are incredibly interesting findings that begin to reveal the neural dynamics occurring in children and adolescents that underlie the ability of mindfulness to improve mental health. Mindfulness isn’t associated with different brain connectivity structures in the brains but rather with different abilities to switch around in real time between systems and this improves mental health.

“Just 11 hours of learning a meditation technique induce positive structural changes in brain connectivity by boosting efficiency in a part of the brain that helps a person regulate behavior in accordance with their goals.” – University of Oregon

Interventions that promote mindfulness consistently show salutary effects on cognition and emotional wellbeing in adults, and more recently, in children and adolescents. However, we lack understanding of the neurobiological mechanisms underlying mindfulness in youth that should allow for more judicious application of these interventions in clinical and educational settings.

We found that trait mindfulness in youth relates to dynamic but not static resting-state connectivity. Specifically, more mindful youth transitioned more between brain states over the course of the scan, spent overall less time in a certain connectivity state, and showed a state-specific reduction in connectivity between salience/emotion and central executive networks. The number of state transitions mediated the link between higher mindfulness and lower anxiety, providing new insights into potential neural mechanisms underlying benefits of mindfulness on psychological health in youth.

Our results provide new evidence that mindfulness in youth relates to functional neural dynamics and interactions between neurocognitive networks, over time.