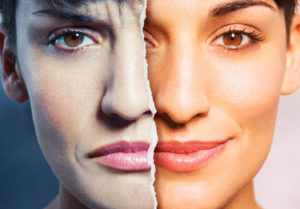 “Mindfulness-based cognitive therapy appears to have lasting benefits for people with bipolar disorder, , , incorporating mindfulness practices and mindful breathing into daily life on a regular basis was associated with better prevention of depressive relapse.” – Mahesh Agrawal

Bipolar Disorder, also known as Manic Depressive Disorder, is a mood disorder characterized by alternating states of extreme depression, relative normalcy, and extreme euphoria (mania). The symptoms of depression and mania are so severe that the individual is debilitated and unable to conduct their normal daily lives. The depression is so severe that suicide occurs in about 1% of cases of Bipolar Disorder. There are great individual differences in Bipolar Disorder. The extreme mood swings can last for a few days to months and can occur only once or reoccur frequently.

Bipolar Disorder affects about 1% of the population throughout the world at any time. But about 3% to 10% of the population may experience it sometime during their lives. It is usually treated with drugs. But these medications are not always effective and can have difficult side effects. Hence, there is a great need for alternative treatments. Mindfulness practices and treatments have been shown to be effective for major mental disorders, including depression and anxiety disorders and to improve the regulation of emotions. Mindfulness-Based Cognitive Therapy (MBCT) was specifically developed for the treatment of depression and has been shown to be very effective.

In today’s Research News article “Psychological interventions for bipolar disorder in low- and middle-income countries: systematic review.” (See summary below or view the full text of the study at: https://www.ncbi.nlm.nih.gov/pmc/articles/PMC6127962/ ), Demissie and colleagues review and summarize the published research literature on the effectiveness of alternative treatments for bipolar disorder in countries with middle to low general income levels. They examined randomized controlled research studies that employed “any psychological intervention delivered either face to face (individual or group format) or online.” These included psychoeducation, family therapy, Cognitive Behavioral Therapy (CBT), or Mindfulness-Based Cognitive Therapy (MBCT).

These studies suggest that alternative treatments are effective in treating bipolar disorder in middle and low income countries as they are in affluent countries. Psychoeducation appears well studied and effective. There were, however, only 2 studies with CBT and only 1 with MBCT. They suggest efficacy. But much more research is needed particularly comparing the different adjunctive treatments to determine which produce the greatest improvements alone or in combination with drugs.

So, improve bipolar disorders in low and middle income countries with psychoeducation, cognitive therapy, or mindfulness.

“Even though it’s not a cure for bipolar disorder, meditation can help you relax and reduce stress. It can also help you disengage from stressful or anxious thoughts, and better control your mood.” – Anthony Watt

To evaluate the efficacy of psychological interventions for bipolar disorder in low- and middle-income countries.

A total of 18 adjunctive studies were identified: psychoeducation (n = 14), family intervention (n = 1), group cognitive–behavioural therapy (CBT) (n = 2) and group mindfulness-based cognitive therapy (MBCT) (n = 1). In total, 16 of the 18 studies were from upper-middle-income countries and none from low-income countries. All used mental health specialists or experienced therapists to deliver the intervention. Most of the studies have moderately high risk of bias. Psychoeducation improved treatment adherence, knowledge of and attitudes towards bipolar disorder and quality of life, and led to decreased relapse rates and hospital admissions. Family psychoeducation prevented relapse, decreased hospital admissions and improved medication adherence. CBT reduced both depressive and manic symptoms. MBCT reduced emotional dysregulation.