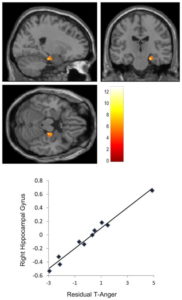 Mindfulness is Associated with Different Brain Responses to Angry Faces

“Being mindful of anger means not suppressing, denying or avoiding it and also not acting out in harmful ways. Instead, connect with the direct experience of the anger, and then decide what action you want to take.” — Jessica Morey

Anger not only produces changes in our behavior and mood, it also produces changes in our physiology, including the brain. It activates the “fight or flight” system in the body, sympathetic nervous, and releases activating hormones. The net result is an increase in blood pressure, heart rate, respiration rate, sweating, especially the palms, feeling hot in the neck/face, shaking or trembling, and decreased heart rate variability. In addition, anger affects and is affected by the brain. These physical effects can be used to objectively measure anger responses. They are also stressful and if prolonged can be damaging to the individual’s health.

If we can control our anger, we will generally be a happier person. But, at times, it is very difficult to do so. Mindfulness and meditation can help. It has been shown to improve our ability to regulate our emotions including anger.  Mindfulness appears to improve our ability not to suppress our emotions, but to fully experience them and yet be better able to respond to them constructively and adaptively.

They recruited right handed healthy adults. Ten of the 18 participants received an 8-week, once a week for 2.5 hours, program of Mindfulness-Based Stress Reduction (MBSR). ”It includes training in formal meditation practices like body scan, sitting meditation, walking meditation, and mindful movement, as well as informal practices to integrate mindfulness into everyday life.” Participants were asked to practice at home for 45 minutes a day for 6 days per week. The participants were measured before and after training for mindfulness and anger. They were also tested for their brain’s response to pictures of angry or neutral faces while simply indicating whether the face was male or female. While viewing the faces their brains were scanned with functional Magnetic Resonance Imaging (fMRI).

They found at baseline, before training, that in response to angry faces the higher the levels of mindfulness the lower the activation of the parietal lobe while the higher the level of anger the greater the activation of the middle frontal gyrus and bilateral angular gyrus. Hence, the participants’ brains responded to the angry faces differently than to the neutral faces and the level of response depended upon their baseline levels of mindfulness and anger. After MBSR training there was a significant increase in mindfulness but no significant change in the fMRI responses to the faces.

Mindfulness is paying attention, non-judgmentally, to experience in the moment. Mindfulness training reduces depression and anxiety and influences neural processes in midline self-referential and lateralized somatosensory and executive networks. Although mindfulness benefits emotion regulation, less is known about its relationship to anger and the corresponding neural correlates. This study examined the relationship of mindful awareness and brain hemodynamics of angry face processing, and the impact of mindfulness training. Eighteen healthy volunteers completed an angry face processing fMRI paradigm and measurement of mindfulness and anger traits. Ten of these participants were recruited from a Mindfulness-Based Stress Reduction (MBSR) class and also completed imaging and other assessments post-training. Self-reported mindful awareness increased after MBSR, but trait anger did not change. Baseline mindful awareness was negatively related to left inferior parietal lobule activation to angry faces; trait anger was positively related to right middle frontal gyrus and bilateral angular gyrus. No significant pre-post changes in angry face processing were found, but changes in trait mindful awareness and anger were associated with sub-threshold differences in paralimbic activation. These preliminary and hypothesis-generating findings, suggest the analysis of possible impact of mindfulness training on anger may begin with individual differences in angry face processing.