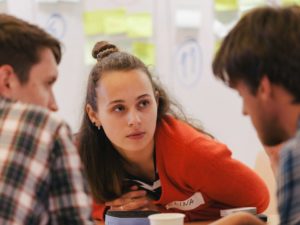 Orienting Attention is Associated with Mindfulness

“Mindfulness is about developing and applying the skills that support alert, observant experience; with regular practice its benefits can begin now and accrue over time.” – Deborah Schoeberlein

One of the primary effects of mindfulness training is an improvement in the ability to pay attention to the task at hand and ignore interfering stimuli. This is an important consequence of mindfulness training and produces improvements in thinking, reasoning, and creativity. The importance of heightened attentional ability to the individual’s ability to navigate the demands of complex modern life cannot be overstated. It helps in school, at work, in relationships, or simply driving a car.

Attention is a complex skill that actually involves a number of skills including alerting, orienting, and preventing interference. It is not known which of these skills, or which combinations of these skills are affected by mindfulness.  In today’s Research News article “Dispositional Mindfulness and Attentional Control: The Specific Association Between the Mindfulness Facets of Non-judgment and Describing With Flexibility of Early Operating Orienting in Conflict Detection.” (See summary below or view the full text of the study at: https://www.frontiersin.org/articles/10.3389/fpsyg.2018.02359/full?utm_source=F-AAE&utm_medium=EMLF&utm_campaign=MRK_847629_69_Psycho_20181211_arts_A ), Sørensen and colleagues recruited college students and administered a questionnaire that measured mindfulness. The participants then performed a flanker task, a test that measures attention including alerting, orienting, and preventing interference. In this task the participant has to respond to the direction of an arrow, when it is surrounded by distracting arrows that point either in the same (congruent) or opposite (incongruent) directions. Sometimes there are signals ahead of time indicating whether it’s a congruent or incongruent trial.

This study is correlational and as such no conclusions about causation can or should be reached. But the results suggest a clear relationship between mindfulness and the orienting component of attention. In particular, the association is with the describing and non-judging facets of mindfulness. This suggests that being able to accurately characterize what is observed without judging it allows for efficient orienting attention while ignoring distractions. As the authors state “This indicates that higher tendencies to be in a mindful state associates with more flexible attention orienting in everyday life. This flexible orienting makes it easier to disengage from salient stimuli/information that is irrelevant for goal-directed behavior.”

These results combined with previous findings that mindfulness training can improve attention suggests that it is not all components of attention that are affected, but those that direct orienting to an object of attention, ignoring other distracting environmental stimuli. It is this improvement in attention that is important for the benefits of mindfulness.

“The practice of mindfulness can be incorporated into a daily routine of simply paying attention, or taken to a deep level of mindful mediation. Daily mindfulness is accomplished when we attentively check-in with our selves, consciously being aware of the senses: sights, tastes, smells, touch and sounds. This also includes awareness of how it makes us feel; happy, sad, melancholy, invigorated etc. . . .The benefits of practice mindfulness range from a more complete experience in life to fine-tuning thought  patterns that ultimately give a higher sense of control and awareness.” – Lynn Soots

Background: A state of mindfulness refers to a present-centered attentional awareness without judging. Being mindful seems to increase the ability to be flexible and adaptive in attention focus according to situational contingencies. The way mindfulness affects such attentional control is often measured with three different but interacting attentional networks of alerting (preparedness), orienting (selection of stimulus), and conflict detection (suppression of irrelevant stimuli). In the current study, the aim was to study the effects of dispositional mindfulness on these attention networks, and specifically the effects on the interactions between these attention networks.

Methods: Fifty participants between 19 and 29 years old filled out the questionnaire Five Facet Mindfulness Questionnaire (FFMQ) and performed the revised version of the Attention Network Test (ANT-R). The five FFMQ facets of Describing, Non-Judgment, Orienting, Non-Reactivity, and Acting with Awareness were included as predictors in multiple linear regression analyses with the ANT-R scores of alerting, orienting, conflict detection, and the interaction scores of alerting by conflict detection and orienting by conflict detection as outcome variables, respectively.

Results: Higher dispositional mindfulness as measured with the five FFMQ facets predicted interaction scores (faster reaction times) of orienting by conflict detection, but none of the other ANT-R scores. It was specifically the FFMQ facets of Describing and non-judgment that predicted this lower interaction score of orienting by conflict detection.

Conclusion: Our findings indicate that being mindful is associated with a more flexible and efficient orienting attention. It is associated with a higher ability to disengage from salient stimuli that is irrelevant to pursue goal-directed behavior (conflict detection).