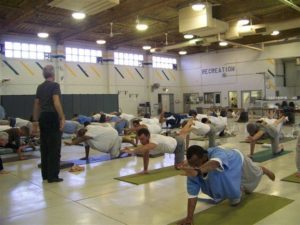 “Ninety percent of the prison population will be released, and if we provide people with skills to reinforce the deeper good in their nature and their stronger, better selves while they are in prison, they will take that with them.” – Kath Meadows

Contemplative practices are well suited to the prison environment. Mindfulness training teaches skills that may be very important for prisoners. In particular, it puts the practitioner in touch with their own bodies and feelings. It improves present moment awareness and helps to overcome rumination about the past and negative thinking about the future. It’s been shown to be useful in the treatment of the effects of trauma and attention deficit disorder. It also relieves stress and improves overall health and well-being. Finally, mindfulness training has been shown to be effective in treating depression, anxiety, and anger. It has also been shown to help overcome trauma in male prisoners.

Yoga practice, because of its mindfulness plus physical exercise characteristics, would seem to be ideal for the needs of an incarcerated population. Indeed, it has been shown to be beneficial for prisoners. In today’s Research News article “Yoga Practice Reduces the Psychological Distress Levels of Prison Inmates.” (See summary below or view the full text of the study at: https://www.ncbi.nlm.nih.gov/pmc/articles/PMC6129942/ ), Sfendla and colleagues recruited adult male and female prison inmates and randomly assigned them to either engage in 10 weeks, once a week for 90 minutes, of hatha yoga practice or free choice exercise, including gym, walking, basketball, or football. They were measured before and after training for anxiety, depression, interpersonal sensitivity, hostility, obsessive-compulsive, psychoticism, paranoid ideation, phobic anxiety, and somatization.

They report that the yoga group significantly improved in global psychological symptoms and on each of the symptom dimensions. The exercise group also improved in global severity and all symptom dimensions except obsessive-compulsive, phobic anxiety, and somatization. In all cases the degree of improvement was greater in the yoga practice group and in the cases of obsessive-compulsive, phobic anxiety, and somatization the differences were statistically significant.

Hence, exercise in general and especially yoga practice significantly improved psychological distress levels in prison inmates. These results are particularly important as the yoga practice effects were compared to an appropriate active control condition. The results suggest that practicing yoga while in prison may improve the mental health of the prisoners and better prepare them for returning to society. It remains for future research to determine is the benefits are lasting or only occur in the immediate aftermath of training.

So, reduce psychological distress levels of prison inmates with yoga.

“We’ve got two and a quarter million people who are incarcerated and a 60 percent recidivism rate. That’s a dismal failure. So while we’ve got them, I think we should be allocating resources to give them the tools so that they don’t come back to prison.” – Jessica Rizzo

Background: Psychiatric ill-health is prevalent among prison inmates and often hampers their rehabilitation. Rehabilitation is crucial for reducing recidivistic offending. A few studies have presented evidence of the positive effect of yoga on the well-being of prison inmates. The conclusion of those previous studies that yoga is an effective method in the rehabilitation process of inmates, and deserves and requires further attention.

Aims: The current study aimed to evaluate the effect of 10 weeks of yoga practice on the mental health profile, operationalized in the form of psychological distress, of inmates.

Methods: One hundred and fifty-two volunteer participants (133 men; 19 women) were randomly placed in either of two groups: to participate in weekly 90-min yoga class (yoga group) or a weekly 90-min free-choice physical exercise (control group). The study period lasted for 10 weeks. Prior to and at the end of the study period the participants completed a battery of self-reported inventories, including the Brief Symptom Inventory (BSI).

Results: Physical activity (including yoga) significantly reduced the inmates’ levels of psychological distress. Yoga practice improved all primary symptom dimensions and its positive effect on the obsessive-compulsive, paranoid ideation, and somatization symptom dimensions of the BSI stayed significant even when comparing with the control group.

Conclusions: Yoga as a form of physical activity is effective for reducing psychological distress levels in prison inmates, with specific effect on symptoms such as suspicious and fearful thoughts about losing autonomy, memory problems, difficulty in making decisions, trouble concentrating, obsessive thought, and perception of bodily dysfunction.