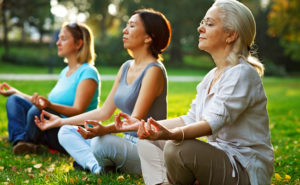 “While we might expect our bodies and brains to follow a shared trajectory of development and degeneration over time, by actively practicing strategies such as meditation, we might actually preserve and protect our physical body and brain structure to extend our golden years and shine even more brightly in old age.” – Sonima Wellness

The aging process involves a systematic progressive decline in every system in the body, the brain included. This includes our mental abilities (cognition) which decline with age including impairments in memory, attention, and problem solving ability. It is inevitable and cannot be avoided. An encouraging new development is that mindfulness practices such as meditation training can significantly reduce these declines in cognitive ability. In addition, it has been found that mindfulness practices reduce the deterioration of the brain that occurs with aging restraining the loss of neural tissue. Indeed, the brains of practitioners of meditation and yoga have been found to degenerate less with aging than non-practitioners.

Most studies of age-related decline are cross-sectional, comparing groups of different ages. In today’s Research News article “Cognitive Aging and Long-Term Maintenance of Attentional Improvements Following Meditation Training.” (See summary below or view the full text of the study at: https://link.springer.com/article/10.1007/s41465-018-0068-1 ), Zanesco and colleagues perform a longitudinal analysis, following participants for up to 7 years to investigate the effects of a meditation retreat on cognitive ability.

They recruited experienced meditators and randomly assigned them to either a wait-list control condition or to receive a 3-month intensive meditation retreat. After completion of the first retreat, the wait-list control participants received the 3-month meditation retreat. All participants were measured before, during, and after the retreat and 6 months, and 1.5 and 7 years later with a response inhibition task. In this task, participants were asked to respond when a long line is present and not respond when an infrequent short line was presented. This task measures high level thinking including attention, response inhibition, discrimination, and vigilance.

They found that during and following the retreat there were large significant improvements in perceptual discrimination, response inhibition, vigilance, and response time variance as measured in the response inhibition task. Importantly, these improvements were maintained for as much as 7 years after the completion of the retreat. Overall, older participants had age-related declines in accuracy. But, older participants who reported large amounts of continued meditation practice, did not have declines.

This study documents that the effects of a 3-month intensive meditation retreat on cognitive ability are large and lasting. In addition, they demonstrate that age-related declines in cognitive performance can be prevented by continued meditation practice. In this study, these effects were observed longitudinally, in the same individuals over time, supplementing the previous findings with cross-sectional studies of groups of individuals of different ages. This suggests that the loss of high-level thought ability does not necessarily inevitably have to decline as we age. It can be improved and sustained with meditation practice.

So, improve cognition and reduce age-related cognitive decline with meditation.

“What we do know is that long-term engagement in mindfulness meditation may enhance cognitive performance in older adults, and that with persistent practice, these benefits may be sustained. That’s great news for the millions of aging adults working to combat the negative effects of aging on the brain.” – B. grace Bullock

Sustained attention is effortful, demanding, and subject to limitations associated with age-related cognitive decline. Researchers have sought to examine whether attentional capacities can be enhanced through directed mental training, with a number of studies now offering evidence that meditation practice may facilitate generalized improvements in this domain. However, the extent to which attentional gains are maintained following periods of dedicated meditation training and how such improvements are moderated by processes of aging have yet to be characterized. In a prior report (Sahdra et al., Emotion 11, 299–312, 2011), we examined attentional performance on a sustained response inhibition task before, during, and after 3-months of full-time meditation. We now extend this prior investigation across additional follow-up assessments occurring up to 7 years after the conclusion of training. Performance improvements observed during periods of intensive practice were partially maintained several years later. Importantly, aging-related decrements in measures of response inhibition accuracy and reaction time variability were moderated by levels of continued meditation practice across the follow-up period. The present study is the first to offer evidence that intensive and continued meditation practice is associated with enduring improvements in sustained attention and response inhibition, with the potential to alter longitudinal trajectories of cognitive change across the lifespan.