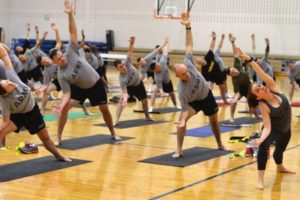 “The first step in yoga practice is to link the mind and body through the breath, bringing awareness to what is happening in the moment. Intense feelings and thoughts can be experienced and reduced in intensity as the mind becomes more still and calm and the body allows the sensations to pass. An experience of a deeper level of existence is possible allowing the body mind complex to feel peace and generate positive emotions and enter a transformative period. With repeated practice and guidance, a yoga practice can bring long term relief and a fresh perspective on life for PTSD sufferers.” – Art of Living

Obviously, these are troubling symptoms that need to be addressed. There are a number of therapies that have been developed to treat PTSD. One of which, mindfulness training has been found to be particularly effective. Yoga practice is a mindfulness practice that has been shown to be helpful for PTSD. If the practice was tailored for the patients’ specific traumas and environment perhaps it would be even more effective. In today’s Research News article “Military-Tailored Yoga for Veterans with Post-traumatic Stress Disorder.” (See summary below or view the full text of the study at: https://www.ncbi.nlm.nih.gov/pmc/articles/PMC6086130/ ), Cushing and colleagues examine the effectiveness of a yoga practice that was tailored for military personnel and combat-related PTSD for the relief of PTSD symptoms of military veterans.

They recruited veterans of either the Iraq or Afghanistan wars who were diagnosed with Post-Traumatic Stress Disorder (PTSD). They were provided a weekly 60-minute yoga training for 6 weeks. The yoga training consisted of relaxation, postures, and body scan meditation. The participants were measured before and after the 6-week training for PTSD symptoms, anxiety, sleep quality, and mindfulness.

They found that after training there was a very large significant reduction in PTSD symptoms, including hyperarousal, re-experiencing, and avoidance symptoms. There were also large significant reductions in sleep disturbance and anxiety and increases in mindfulness. Hence, there were marked improvements in the psychological well-being of the combat veterans following yoga training.

The study suffers from the fact that there wasn’t a control, comparison, condition. As a result, the results might have been influenced by participant and experimenter biases. But, the observed changes were large and robust making it unlikely that they were due to contamination. The findings were also in line with previous findings in better controlled trial that mindfulness training is an effective treatment for the symptoms of PTSD.

So, reduce symptoms of Post-Traumatic Stress Disorder (PTSD) with yoga.

“I-Rest can produce a number of important changes in PTSD sufferers, like improved sleep, moderated behavior, and better emotional regulation. It can even lead to a decreased pharmaceutical regimen for PTSD patients.” – Armin Rosen

Among veterans of post-9/11 conflicts, estimates of post-traumatic stress disorder (PTSD) range from 9% shortly after returning from deployment to 31% a year after deployment. Clinical and pharmaceutically based treatments are underutilized. This could be due to concerns related to lost duty days, as well as PTSD patients’ fears of stigma of having a mental health condition. Yoga has been shown to reduce PTSD symptoms in the civilian population, but few studies have tested the impact of yoga on veterans of post-9/11 conflicts. The purpose of this study is to test the impact of yoga on post-9/11 veterans diagnosed with PTSD.

Participants were 18 yr of age or older and veterans of post-9/11 conflicts. They had subthreshold or diagnostic-level PTSD related to their combat military service, as determined by a score of 30 or higher on the PTSD Checklist-Military version (PCL-M). Veterans participated in 60-min weekly yoga sessions for 6 wk taught by a Warriors at Ease-trained yoga instructor who is a, post-9/11 veteran. The yoga sessions incorporated Vinyasa-style yoga and a trauma-sensitive, military-culture informed approach advocated by two separate organizations: Warriors at Ease and Meghan’s Foundation. Data were collected at baseline and again after 7 wk. The primary outcome was PCL-M score. Participants also completed the Patient Health Questionnaire, the Beck Anxiety Inventory, the Pittsburgh Sleep Quality Index, and the Mindful Attention Awareness Scale at both time points.

This study demonstrates that a trauma-sensitive yoga intervention may be effective for veterans with PTSD symptoms, whether as stand-alone or adjunctive therapy. The impressive decrease in PTSD symptomatology may be due to the tailored military-specific nature of this intervention and the fact that it was led by a veteran of post-9/11 conflicts. More research is needed with a larger sample and a more diverse veteran population.