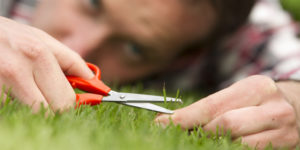 Lessen the Frequency and Impact of Obsessional Intrusive Thoughts with Mindfulness

‘Mindfulness is a useful technique for decreasing anxiety because of its emphasis on accepting your thoughts. When an intrusive thought pops up, you let it exist in your mind without providing it any weight. You experience the thought, but don’t judge it, change it or try to make it go away. You wait until it passes instead of thinking it should or shouldn’t be there.” – OCD

Obsessive-Compulsive Disorder (OCD) sufferer have repetitive anxiety producing intrusive thoughts (obsessions) that result in repetitive behaviors to reduce the anxiety (compulsions). In a typical example of OCD, the individual is concerned about germs and is unable to control the anxiety that these thoughts produce. Their solution is to engage in ritualized behaviors, such as repetitive cleaning or hand washing that for a short time relieves the anxiety. The obsessions and compulsions can become so frequent that they become a dominant theme in their lives. Hence OCD drastically reduces the quality of life and happiness of the sufferer and those around them. About 2% of the population, 3.3 million people, are affected at some time in their life. Mindfulness training has been shown to be effective in treating OCD.

Obsessional thoughts are not restricted to those diagnosed with OCD. In fact, many normally functioning individuals have occasional obsessional intrusive thoughts. It is not known if mindfulness affects these thoughts in otherwise high functioning adults. In today’s Research News article “Which Facets of Mindfulness Protect Individuals from the Negative Experiences of Obsessive Intrusive Thoughts?” (See summary below or view the full text of the study at: https://www.ncbi.nlm.nih.gov/pmc/articles/PMC6061236/ ), Emerson and colleagues examined the relationships of dispositional mindfulness with obsessional intrusive thoughts in normal adults.

They recruited staff, students or alumni of a university and had them complete a number of psychometric scales on-line. These scales measured obsessive compulsive symptoms, obsessional intrusive thoughts, and mindfulness. The relationships among these variables were then explored with univariate and multivariate regression analysis.

The results suggest that dispositional mindfulness overall tends to counteract obsessional intrusive thoughts in normal adults. This is especially true for acting toward them with awareness, treating them without judgement, and without reacting to them. But, mindfully observing these thoughts by itself tends to heighten them. These results also suggest that mindfulness training might be effective in lessening the frequency of obsessional intrusive thoughts and their effects on the individual.

So, lessen the frequency and impact of obsessional intrusive thoughts with mindfulness.

“most OCD sufferers I know who practice mindfulness find it very helpful in fighting their disorder. To be able to focus on what is really happening in any given moment, as opposed to dwelling on the past or anticipating the future, takes away the power of OCD.” – Janet Singer

Obsessive intrusive thoughts (OITs) are experienced by the majority of the general population, and in their more extreme forms are characteristic of obsessive–compulsive disorder (OCD). These cognitions are said to exist on a continuum that includes differences in their frequency and associated distress. The key factors that contribute to an increased frequency and distress are how the individual appraises and responds to the OIT. Facets of mindfulness, such as nonjudgment and nonreactivity, offer an alternative approach to OITs than the negative appraisals and commonly utilised control strategies that often contribute to distress. Clarifying the role of facets of mindfulness in relation to these cognitions offers a means to elucidate individual characteristics that may offer protection from distress associated with OITs. A sample of nonclinical individuals (n = 583) completed an online survey that assessed their experiences of OITs, including frequency, emotional reaction and appraisals, and trait mindfulness. The findings from a series of multiple regression analyses confirmed that specific facets of mindfulness relating to acting with awareness and acceptance (nonjudgment and nonreactivity) consistently predicted less frequent and distressing experiences of OITs. In contrast, the observe facet emerged as a consistent predictor of negative experiences of OITs. These findings suggest that acting with awareness and acceptance may confer protective characteristics in relation to OITs, but that the observe facet may reflect a hypervigilance to OITs. Mindfulness-based prevention and intervention for OCD should be tailored to take account of the potential differential effects of increasing specific facets of mindfulness.