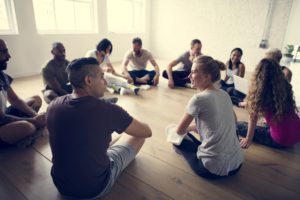 “People at risk for depression are dealing with a lot of negative thoughts, feelings and beliefs about themselves and this can easily slide into a depressive relapse. MBCT helps them to recognize that’s happening, engage with it in a different way and respond to it with equanimity and compassion.” – Willem Kuyken

Clinically diagnosed depression is the most common mental illness, affecting over 6% of the population. Major depression can be quite debilitating. Depression can be difficult to treat and is usually treated with anti-depressive medication. But, of patients treated initially with drugs only about a third attained remission of the depression. After repeated and varied treatments including drugs, therapy, exercise etc. only about two thirds of patients attained remission. But, drugs often have troubling side effects and can lose effectiveness over time. In addition, many patients who achieve remission have relapses and recurrences of the depression. Even after remission some symptoms of depression may still be present (residual symptoms).

Being depressed and not responding to treatment or relapsing is a terribly difficult situation. The patients are suffering and nothing appears to work to relieve their intense depression. Suicide becomes a real possibility. So, it is imperative that other treatments be identified that can relieve the suffering. Mindfulness training is an alternative treatment for depression. It has been shown to be an effective treatment for depression and its recurrence and even in the cases where drugs fail.

The most commonly used mindfulness technique for the treatment of depression is Mindfulness-Based Cognitive Therapy (MBCT).  MBCT involves mindfulness training, containing sitting and walking meditation and body scan, and cognitive therapy to alter how the patient relates to the thought processes that often underlie and exacerbate psychological symptoms. MBCT has been shown to be as effective as antidepressant drugs in relieving the symptoms of depression and preventing depression reoccurrence and relapse. In addition, it appears to be effective as either a supplement to or a replacement for these drugs.

In today’s Research News article “Mindfulness-based cognitive therapy in patients with depression: current perspectives.” (See summary below or view the full text of the study at: https://www.ncbi.nlm.nih.gov/pmc/articles/PMC6018485/ ), MacKenzie and colleagues review the published research literature on the application of Mindfulness-Based Cognitive Therapy (MBCT) to the treatment of depression. They find that the published research makes a very strong case that MBCT is a safe and effective treatment for depression, reducing depression when present and preventing relapse when in remission. The literature also finds that MBCT appears to act on depression by heightening mindfulness, increasing self-compassion and positive emotions and by reducing repetitive negative thoughts (rumination) and cognitive and emotional reactivity.

MBCT, however, classically requires a certified trained therapist. This produces costs that many clients can’t afford. In addition, the participants must be available to attend multiple sessions at particular scheduled times that may or may not be compatible with their busy schedules. As a result, on-line mindfulness training programs and workbook programs have been developed. These have tremendous advantages in decreasing costs and making training schedules much more flexible. MacKenzie and colleagues report that the research demonstrates that MBCT, delivered either over the web or via study-at-home workbooks is also a safe and effective treatment for depression.

The review suggests that Mindfulness-Based Cognitive Therapy (MBCT) has a wide variety of positive psychological effects on the participant that work to counter and prevent depression and that MBCT is effective delivered either by a trained therapist or over the web or via study-at-home workbooks.

“MBCT therapists teach clients how to break away from negative thought patterns that can cause a downward spiral into a depressed state so they will be able to fight off depression before it takes hold.” – Psychology Today

Mindfulness-based cognitive therapy (MBCT) was developed to prevent relapse in individuals with depressive disorders. This widely used intervention has garnered considerable attention and a comprehensive review of current trends is warranted. As such, this review provides an overview of efficacy, mechanisms of action, and concludes with a discussion of dissemination. Results provided strong support for the efficacy of MBCT despite some methodological shortcomings in the reviewed literature. With respect to mechanisms of action, specific elements, such as mindfulness, repetitive negative thinking, self-compassion and affect, and cognitive reactivity have emerged as important mechanisms of change. Finally, despite a lack of widespread MBCT availability outside urban areas, research has shown that self-help variations are promising. Combined with findings that teacher competence may not be a significant predictor of treatment outcome, there are important implications for dissemination. Taken together, this review shows that while MBCT is an effective treatment for depression, continued research in the areas of efficacy, mechanisms of action, and dissemination are recommended.