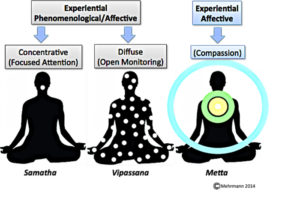 “…In focused attention or concentration meditation, you direct your attention to a chosen object, such as the sensation of the breath entering and leaving your nostrils, and you keep your attention focused on that object from moment to moment.

…In open monitoring meditation — or “open awareness” meditation, as I prefer to call it — you cultivate an “objectless” awareness, which doesn’t focus on any explicit object but remains open and attentive to whatever arises in experience from moment to moment.” – Evan Thompson

Meditation training has been shown to improve health and well-being. It has also been found to be effective for a large array of medical and psychiatric conditions, either stand-alone or in combination with more traditional therapies. As a result, meditation training has been called the third wave of therapies. One problem with understanding meditation effects is that there are, a wide variety of meditation techniques and it is not known which work best for improving different conditions.

Two in particular types of meditation can be characterized on a continuum with the degree and type of attentional focus. In focused attention meditation, the individual practices paying attention to a single meditation object, learns to filter out distracting stimuli, including thoughts, and learns to stay focused on the present moment, filtering out thoughts centered around the past or future. In open monitoring meditation, the individual opens up awareness to everything that’s being experienced regardless of its origin. These include bodily sensations, external stimuli, and even thoughts. The meditator just observes these thoughts and lets them arise and fall away without paying them any further attention.

These techniques have common properties of restful attention on the present moment, but there are large differences. These differences are likely to produce different effects on the practitioners, their psychology and their brains. The nervous system is a dynamic entity, constantly changing and adapting to the environment. It will change size, activity, and connectivity in response to experience. These changes in the brain are called neuroplasticity. Over the last decade neuroscience has been studying the effects of contemplative practices on the brain and has identified neuroplastic changes in widespread area. and has found that meditation practice appears to mold and change the brain.

In today’s Research News article “Open monitoring meditation reduces the involvement of brain regions related to memory function.” (See summary below or view the full text of the study at: https://www.ncbi.nlm.nih.gov/pmc/articles/PMC6028418/ ), Fujino and colleagues recruited experienced meditators and scanned their brains for functional connectivity between structures with functional Magnetic Resonance Imaging (f-MRI) while they were engaging in open monitoring meditation, and again when engaging in focused attention meditation. Each f-MRI session was preceded by a week of practicing the appropriate meditation type at home.

They found that both meditation types produced decreased functional connectivity between the striatum, a component of the attention neural network and the posterior cingulate cortex a component of the Default Mode Network that is usually active during mind wandering. These findings suggest that both techniques help keep the mind focused and successfully suppress the mind straying from the task at hand.

So, the results are suggestive of similar effects of open monitoring meditation and focused attention meditation on the brain systems maintaining attention and suppressing mind wandering and differing effects on the brain system underlying focused attention and memory. These differing neural changes suggest that the two practices produce different experiential effects on the individual during practice.

“Open monitoring meditation is known to make you more creative. And if you feel as though you are stuck in a rut or as though you need to find alternative solutions to problems, then this can be a very effective techniques to use.

Focused attention meditation, as you know, is all about focusing your mind on one thing at a time, often the breath. This is good for improve focus and concentration, for stopping multitasking, and also for various health reasons.” – Paul Harrison

Mindfulness meditation consists of focused attention meditation (FAM) and open monitoring meditation (OMM), both of which reduce activation of the default mode network (DMN) and mind-wandering. Although it is known that FAM requires intentional focused attention, the mechanisms of OMM remain largely unknown. To investigate this, we examined striatal functional connectivity in 17 experienced meditators (mean total practice hours = 920.6) during pre-resting, meditation, and post-resting states comparing OMM with FAM, using functional magnetic resonance imaging. Both FAM and OMM reduced functional connectivity between the striatum and posterior cingulate cortex, which is a core hub region of the DMN. Furthermore, OMM reduced functional connectivity of the ventral striatum with both the visual cortex related to intentional focused attention in the attentional network and retrosplenial cortex related to memory function in the DMN. In contrast, FAM increased functional connectivity in these regions. Our findings suggest that OMM reduces intentional focused attention and increases detachment from autobiographical memory. This detachment may play an important role in non-judgmental and non-reactive attitude during OMM. These findings provide new insights into the mechanisms underlying the contribution of OMM to well-being and happiness.