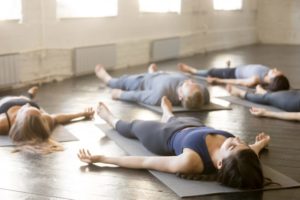 “One of the great benefits of our yoga practice is we start to notice our triggers and reactivity, which gives us the choice to respond instead of reacting the same old way.” – Kimber Simpkins

Emotions are important to our well-being. They provide the spice of life, the joy, the love, the happiness. But, they can be troubling producing sadness, hurt and fear. They can also be harmful such as the consequences of out of control anger or suicidal depression. We need emotions, but we must find ways to keep them under control. Emotion regulation is the term used to describe the ability to control emotions. It is not eliminating or suppressing them. Far from it, emotion regulation allows for the emotion to be fully felt and experienced. But, it maintains the intensity of the emotion at a manageable level and also produces the ability to respond to the emotion appropriately and constructively. Clearly, emotion regulation is a key to a happier life.

Mindfulness practices have been shown to improve emption regulation. So, there is reason to believe that yoga practice may improve emotion regulation. But it is not known the amount of practice needed for maximal effectiveness. In today’s Research News article “Reasons, Years and Frequency of Yoga Practice: Effect on Emotion Response Reactivity.” (See summary below or view the full text of the study at: https://www.ncbi.nlm.nih.gov/pmc/articles/PMC6039555/ ), Mocanu and colleagues recruited adult yoga practitioners. They were asked about their reasons for engaging in yoga practice, their years of practice and how often per week that they practiced. They were also measured for their difficulties with emotions regulation.

The participants’ emotional reactions were measured by presenting them with emotion evoking pictures. They were asked to carefully watch pictures on a computer screen that were rated as evoking negative or positive emotions and were emotionally neutral. The participants responded with ratings of the nature and intensity of their emotions. While the pictures were presented the electrocardiogram (EKG), skin conductance, and respiration were recorded as measures of the participants’ physiological reactions.

These results suggest that recent practice of yoga decreases emotional reactions and the more years that they practiced yoga the lower the respiratory response to negative stimuli and the greater the respiratory response to positive stimuli. Hence yoga practice alters both psychological and physiological responses to stimuli that evoke emotions. This implies that yoga practice alters emotional reactivity in the practitioners perhaps damping the bad feelings produced by negative emotions while enhancing reactions to positive stimuli. This indicates that yoga practice, like other mindfulness practices, can alter emotional reactivity.

So, improve emotional reactivity with yoga.

“Studies have shown that doing yoga activates the parasympathetic nervous system, lowering the heart rate, respiratory rate, and blood pressure. Cortisol levels drop (the hormone secreted by the adrenal glands in response to stress) and the pituitary gland secretes oxytocin and prolactin—the “cuddle” hormones responsible for feelings of love.” – Kripalu

Yoga practice, even in the short term, is supposed to enhance wellbeing and counteract psychopathology through modification of emotion reactivity. Yoga teaches that emotional responses may be less pronounced with longer and more frequent practice, and potentially when people perform yoga for mental rather than physical reasons. We tested 36 yoga practitioners of varying experience (between 6 months and 11 years of practice). We assessed participants’ self-reported emotional experience and peripheral physiological reactions (heart rate, skin conductance, respiration) when seeing positive and negative pictures. Results were analyzed as a function of the years of, frequency of, and reasons for yoga practice. We found a heart rate increase with the degree participants performed yoga for mental reasons. In addition, years of yoga practice were significantly associated with reduced abdominal respiratory rate when facing negative pictures, speaking in favor of reduced arousal with yoga experience. Finally, regarding frequency of practice, a higher frequency in the last month was linked to less negative and positive experiences as well as a reduced abdominal respiratory amplitude when viewing positive pictures. Altogether, these results demonstrate that intense short-term yoga practice might relate to a (i) decrease in the intensity of self-reported emotional experiences and (ii) deepened respiration. Short-term effects might be shaped by what participants expect as practice benefits. However, several years of practice might be needed to decrease respiratory arousal in the face of negative situations, which likely is a manifestation of an evolution in the emotion regulation process.