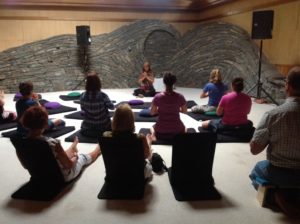 Improve the Brain’s Attentional Ability with a Meditation Retreat

“Here’s where meditation begins to show itself as a biohacking marvel. Learning how to interrupt one’s reaction pattern – and then doing that over and over – can reshape behaviour. And if behaviour is changing, then the brain is changing.” – Zoe Schlanger

Retreat can be a powerful experience. But, it is quite difficult and challenging. It can be very tiring as it can run from early in the morning till late at night every day. It can also be physically challenging as engaging in meditation repeatedly over the day is guaranteed to produce many aches and pains in the legs, back, and neck. But the real challenges are psychological, emotional, and spiritual. Retreat can be a real test.

The nervous system is a dynamic entity, constantly changing and adapting to the environment. It will change size, activity, and connectivity in response to experience. These changes in the brain are called neuroplasticity. Over the last decade neuroscience has been studying the effects of contemplative practices on the brain and has identified neuroplastic changes in widespread areas. In other words, meditation practice appears to mold and change the brain, producing psychological, physical, and spiritual benefits.

Hence, an intensive meditation retreat would be expected to produce neuroplastic changes in the brains of the participants. In today’s Research News article “Effects of a 7-Day Meditation Retreat on the Brain Function of Meditators and Non-Meditators During an Attention Task.” (See summary below or view the full text of the study at: https://www.ncbi.nlm.nih.gov/pmc/articles/PMC6004402/ ), Kozasa and colleagues recruited meditation naïve and long-term meditators ( > 3 years of experience) and had them engage in a 7-day intensive Zen meditation retreat. Sessions of sitting and walking meditation, yoga, text reading, and meals were scheduled nearly non-stop from 5:10 in the morning till 11:30 at night each day. Before and after the retreat the participants underwent functional Magnetic Resonance Imaging (f-MRI) brain scanning while performing and attention demanding task (Stroop test).

They did not find any difference between the novice and experienced meditators in performance of the attention task either before or after the retreat. But, they found considerable differences in their brains. Prior to the retreat during the attention task with distraction the experienced meditators and not the novices had reduced activity in the anterior cingulate, ventromedial prefrontal cortex/anterior cingulate, caudate/putamen/pallidum/temporal lobe (center), insula/putamen/temporal lobe (right) and posterior cingulate. Following the retreat, the novices evidenced similar reductions in activity in these structures.

These structures are for the most part components of the so-called default mode network that is activated during mind wandering and self-referential thought. So, the experienced meditators with years of meditative attention training had differences in their brains suggesting better ability to concentrate on the task at hand, with less interference from mind wandering. Surprisingly, novice meditators had similar changes after only 7-day of participation in a meditation retreat. These results suggest that meditation changes the brain to improve concentration and attention. It does so, in part, by reducing the ability of the brain to let the mind wander away from the task at hand.

It is interesting that the neuroplastic changes in the brains of the novices essentially caught up to those of the experienced meditators with just 7 days of meditation training. This underscores the power of retreat. It also suggests that meditation can alter the brain relatively quickly. Hence, for improvement of attention, it doesn’t take years of training, it can be accomplished in an intensive week.

Improve the brain’s attentional ability with a meditation retreat.

“One can have no smaller or greater mastery than mastery of oneself.” — Leonardo da Vinci

Meditation as a cognitive enhancement technique is of growing interest in the field of health and research on brain function. The Stroop Word-Color Task (SWCT) has been adapted for neuroimaging studies as an interesting paradigm for the understanding of cognitive control mechanisms. Performance in the SWCT requires both attention and impulse control, which is trained in meditation practices. We presented SWCT inside the MRI equipment to measure the performance of meditators compared with non-meditators before and after a meditation retreat. The aim of this study was to evaluate the effects of a 7-day Zen intensive meditation training (a retreat) on meditators and non-meditators in this task on performance level and neural mechanisms. Nineteen meditators and 14 non-meditators were scanned before and after a 7-day Zen meditation retreat. No significant differences were found between meditators and non-meditators in the number of the correct responses and response time (RT) during SWCT before and after the retreat. Probably, due to meditators training in attention, their brain activity in the contrast incongruent > neutral during the SWCT in the anterior cingulate, ventromedial prefrontal cortex/anterior cingulate, caudate/putamen/pallidum/temporal lobe (center), insula/putamen/temporal lobe (right) and posterior cingulate before the retreat, were reduced compared with non-meditators. After the meditation retreat, non-meditators had reduced activation in these regions, becoming similar to meditators before the retreat. This result could be interpreted as an increase in the brain efficiency of non-meditators (less brain activation in attention-related regions and same behavioral response) promoted by their intensive training in meditation in only 7 days. On the other hand, meditators showed an increase in brain activation in these regions after the same training. Intensive meditation training (retreat) presented distinct effects on the attention-related regions in meditators and non-meditators probably due to differences in expertise, attention processing as well as neuroplasticity.