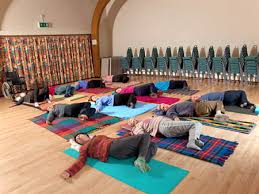 “Severe fatigue is a significant problem for many cancer survivors.  A meta-analysis of yoga studies of cancer survivors found yoga programs produced large reductions in distress, anxiety, and depression; moderate reductions in fatigue; moderate increases in quality of life, emotional function and social functioning; and a small increase in functional well-being.” – Cort Johnson

Chronic Fatigue Syndrome (CFS) occurs in about 0.2% of the population. It produces a profound, prolonged, and debilitating tiredness. When severe, it can produce a chronic and extreme tiredness, so severe that sufferers can become bed-bound or need to use a wheel-chair. It produces muscle pain, brain fog and dizziness, poor memory, disturbed sleep and trouble with digestion. But, deep fatigue can also be produced by a myriad of conditions including diseases and their treatment, including cancer, multiple sclerosis, rheumatoid arthritis, insomnia, and chronic obstructive pulmonary disease (COPD). Fatigue is also associated with aging. Fatigue is widespread. Some form of chronic fatigue has been reported by about 10% of the population.

Unfortunately, there are no known cures for CFS. The usual treatments for fatigue are targeted at symptom relief and include exercise and drugs. As an alternative to these traditional treatments, mindfulness training has been shown to reduce fatigue. The mindfulness practice of Yoga also includes exercise and it has been shown to be an effective treatment for the symptoms of Chronic Fatigue Syndrome (CFS). But, the mechanism is not known of how yoga may be affecting the symptoms of CFS.

In today’s Research News article “Changes in fatigue, autonomic functions, and blood biomarkers due to sitting isometric yoga in patients with chronic fatigue syndrome.” (See summary below or view the full text of the study at: https://www.ncbi.nlm.nih.gov/pmc/articles/PMC5891891/ ), Oka and colleagues recruited patients suffering from Chronic Fatigue Syndrome (CFS) who had not responded in six months to traditional treatments and who completed 8-weeks, of twice a week for 20 minutes seated yoga practice. To examine the immediate, acute effects of the yoga practice, the final 20-minute session was preceded and followed by measures of fatigue, vigor, mood, heart rate, and respiration. In addition, a medical exam and a blood draw was included. The blood was assayed for cortisol, prolactin, 3-methoxy-4-hydroxyphenylglycol (MHPG), homovanillic acid (HVA), Brain-derived neurotrophic factor (BDNF), DHEA-s, TGF-β1, IL-6, TNF-α, IFN-α, and IFN-γ.

They found, as expected that the 20-minute yoga practice resulted in significantly decreased fatigue and increased vigor. This was accompanied by a decrease in heart rate and an increase in the high frequency components of the electrocardiogram. In the blood, there were significant increases following yoga in DHEA-s and decreases in cortisol and TNF-α. To determine which factors were associated with fatigue and vigor, they performed a correlational analysis. They found that the larger the changes in TGF- β1 and BDNF the greater the reduction in fatigue. Also, the greater the increase in homovanillic acid (HVA) the greater the increase in vigor.

The pattern of results suggests that, on a short-term basis, yoga practice tends to reduce stress, as indicated by heart rate changes and DHEA-s and cortisol levels and reduce inflammatory responses, as indicated by changes in TNF-α and TGF- β1. This suggests that yoga may improve the symptoms of Chronic Fatigue Syndrome (CFS) by decreasing stress and inflammation. This is an interesting conclusion that may help lead to more effective treatments to end the suffering of CFS patients.

“CFS, or Chronic Fatigue Syndrome can be debilitating. It causes all kinds of non-specific symptoms including weakness, impaired memory, and fatigue for no reason, loss of concentration, varied muscle pains, headaches, sore throat, insomnia and apathy. . .  Yoga addressed the root of the problem, because instead of exhausting the body further, as traditional exercise might, it re-stores energy in the body for use in healing itself. Yoga does this primarily through pranayama (breathing exercise), relaxation, meditation and in this case, gentle, restorative asana.” – YogiDiva

In a previous randomized controlled trial, we found that sitting isometric yoga improves fatigue in patients with chronic fatigue syndrome (CFS) who are resistant to conventional therapy. The aim of this study was to investigate possible mechanisms behind this finding, focusing on the short-term fatigue-relieving effect, by comparing autonomic nervous function and blood biomarkers before and after a session of isometric yoga.

Fifteen patients with CFS who remained symptomatic despite at least 6 months of conventional therapy practiced sitting isometric yoga (biweekly 20 min practice with a yoga instructor and daily home practice) for eight weeks. Acute effects of sitting isometric yoga on fatigue, autonomic function, and blood biomarkers were investigated after the final session with an instructor. The effect of a single session of sitting isometric yoga on fatigue was assessed by the Profile of Mood Status (POMS) questionnaire immediately before and after the session. Autonomic nervous function (heart rate (HR) variability) and blood biomarkers (cortisol, DHEA-S, TNF-α, IL-6, IFN-γ, IFN-α, prolactin, carnitine, TGF-β1, BDNF, MHPG, and HVA) were compared before and after the session.