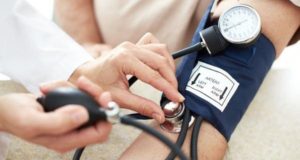 “Yoga can reduce stress-induced hypertension, while addressing its underlying causes. It pacifies the sympathetic nervous system and slows down the heart, while teaching the muscles and mind to relax deeply.” – Marla Apt

High Blood Pressure (Hypertension) is an insidious disease because there are no overt symptoms. The individual feels fine. But it can be deadly as more than 360,000 American deaths, roughly 1,000 deaths each day, had high blood pressure as a primary or contributing cause. In addition, hypertension markedly increases the risk heart attack, stroke, heart failure, and kidney disease.  It is also a very common disorder with about 70 million American adults (29%) having high blood pressure and only about half (52%) of people with high blood pressure have their condition under control.

High blood pressure, because it doesn’t have any primary symptoms, is usually only diagnosed by direct measurement of blood pressure usually by a health care professional. When hypertension is chronically present over three quarters of patients are treated with antihypertensive drugs. But these medications often have adverse side effects. So, patients feel lousy when taking the drugs, but fine when they’re not. So, compliance is a major issue with many patients not taking the drugs regularly or stopping entirely. Obviously, there is a need for alternative to drug treatments for hypertension. Mindfulness practices have been shown to aid in controlling hypertension. Exercise is also known to help. So, yoga practice, which combines mindfulness practice with exercise would seem to be a good candidate practice for the treatment of hypertension,

In today’s Research News article “Effect of 1-week yoga-based residential program on cardiovascular variables of hypertensive patients: A Comparative Study.” (See summary below or view the full text of the study at: http://www.ijoy.org.in/article.asp?issn=0973-6131;year=2018;volume=11;issue=2;spage=170;epage=174;aulast=Metri ), Metri and colleagues recruited adults (aged 30-60 years) with hypertension; half of which participated in a 1-week Integrative Yoga Therapy program, while half were on antihypertensive medications. The Integrative Yoga Therapy program included poses, breathing exercises, meditation, and relaxation. They were measured before, during, and after treatment for heart rate, blood pressure, cardiac output, cardiac stroke volume, total peripheral vascular resistance, and baroreflex sensitivity.

They found that compared to baseline and the group on antihypertensive medications after the 1-week Integrative Yoga Therapy program there were significant decreases in both systolic and diastolic blood pressure, mean arterial pressure, Total peripheral vascular resistance, and baroreflex sensitivity. Hence, one week of Yoga Therapy appears to be a safe and effective treatment for hypertension.

It should be kept in mind that the control condition was not an active control. Thus, it is possible that any activity might have produced comparable benefits. In future research that Yoga Therapy program needs to be compared to other activities such as aerobic exercise. In addition, it is not known which components of Yoga Therapy or which combinations of components were needed to produce the benefits. Future research should perform a component analysis to determine whether poses, breathing exercises, meditation, and/or relaxation were necessary for the effects. But, it is clear that participation in a 1-week program of Integrative Yoga Therapy can improve hypertension.

“People who follow the ancient practice of yoga may be getting an added health boost, with a new study suggesting it can fight high blood pressure — also known as hypertension.” – Robert Preidt

Introduction: Hypertension (HTN) is an important public health concern and a leading cause of morbidity and mortality worldwide. Yoga is a form of mind–body medicine shown to be effective in controlling blood pressure (BP) and reduces cardiac risk factors in HTN. Integrated approach of Yoga therapy (IAYT) is a residential yoga-based lifestyle intervention proven to be beneficial in several health conditions. Aim: To study the efficacy of 1 week of residential IAYT intervention on cardiovascular parameters in hypertensive patients. Methodology: Twenty hypertensive individuals (7 females) within age range between 30 and 60 years (average; 46.62 ± 9.9 years), who underwent 1 week of IAYT treatment for HTN, were compared with age- gender-matched non-IAYT group (5 females; average age; 47.08 ± 9.69 years) in terms of systolic BP (SBP), diastolic BP (DBP), mean arterial pressure (MAP), cardiac output (CO), stroke volume (SV), baroreflex sensitivity (BRS), and total peripheral vascular resistance (TPVR), IAYT program consisted of sessions of asanas, breathing practices, meditation and relaxation techniques, low salt, low-calorie diet, devotional session, and counseling. Individuals in non-IAYT group followed their normal routine. All the variables were assessed before and after one week. Data were analyzed using SPSS version 16. RM-ANOVA was applied to assess within group and between group changes after intervention. Results: There was a significant improvement in SBP (P = 0.004), DBP (P = 0.008), MAP (0.03), BRS (P < 0.001), and TPVR (P = 0.007) in IAYT, group whereas in control group, we did not find significant difference in any of the variables. Between-group comparison showed a significant improvement in SBP (P = 0.038), BRS (P = 0.034), and TPVR (P = 0.015) in IAYT group as compared to non-IAYT group. Conclusion: One-week IAYT intervention showed an improvement in baroreflex sensitivity, systolic BP, and total peripheral vascular resistance in hypertensive patients. However, further randomized control trials need to be performed to confirm the present findings.