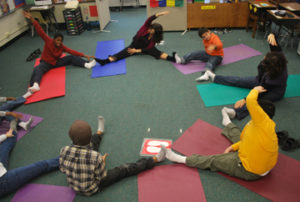 ASD is a serious disorder that impairs the individual’s ability to lead independent lives including completing an education, entering relationships or finding and holding employment. Its causes are unknown and there are no known cures. Treatment is generally directed at symptoms and can include behavioral therapies and drug treatments. Clearly, there is a need for effective treatment options. Mindfulness training has been shown to be helpful in treating ASD. Exercise has also been shown to help relieve some of the symptoms of ASD. It stands to reason, then, that the combination of mindfulness training and exercise provided by yoga practice would be effective for the symptoms of ASD.

In today’s Research News article “Effects of multimodal mandala yoga on social and emotional skills for youth with autism spectrum disorder: An exploratory study.” (See summary below or view the full text of the study at: http://www.ijoy.org.in/article.asp?issn=0973-6131;year=2018;volume=11;issue=1;spage=59;epage=65;aulast=Litchke), Litchke and colleagues performed an exploratory pilot study of the effectiveness of a yoga program specially tailored for children with Autism spectrum disorder (ASD). Five boys, aged 8 – 13 years, with ASD were recruited and provided with 2 guided 60-minute group yoga sessions per week for 4 weeks. The participants sat in a circle and were led in “Multimodal Mandala yoga comprised 26 circular partner/group poses, color and tracing sheets, rhythmic chanting, yoga cards, and games.” Before and after training they were measured for social skills and facial/emotional mood.

They found that after training the boys had significant improvements in social skills, including response to initiation, initiating interaction, and affective understanding and perspective taking. In addition, qualitative analysis of narrative notes made by the program helpers suggested that there were improvements, after yoga training, in the boys’ mood and emotional expression, teamwork, and empathy toward others. These results suggest that the yoga program enhanced the social and emotional behaviors of the boys with ASD. The yoga program appeared to improve skills needed for developing positive relationships with others.

These results must be taken as preliminary and no clear conclusions can be reached as this was an uncontrolled pilot study. But the results provide clear support for conducting a larger randomized controlled clinical trial. Improving social skills and emotional responding is very important for boys with Autism spectrum disorder (ASD) to be able to better navigate their environment and carry on successful lives. These pilot results provide hope that yoga practice may be helpful.

So, improve social and emotional skills in youth with autism spectrum disorder with yoga.

“Children with autism and special needs can learn coping strategies through the practice of yoga so they may live calmer, happier, more peaceful and healthier lives.”

Context: Youth with autism spectrum disorder (ASD) demonstrates impairment in the ability to socially and emotionally relate to others that can limit participation in groups, interaction with peers, and building successful life relationships. Aims: The aim of this exploratory study was to examine the effects of a novel multimodal Mandala yoga program on social and emotional skills for youth with ASD. Subjects and Methods: Five males with ASD attended 1 h yoga sessions, twice a week for 4 weeks. Multimodal Mandala yoga comprised 26 circular partner/group poses, color and tracing sheets, rhythmic chanting, yoga cards, and games. Treatment and Research Institute for ASD Social Skills Assessment (TSSA) scores were collected before and after the eight yoga sessions. The Modified Facial Mood Scale (MFMS) was used to observe mood changes before and after each yoga class. Paired sample t-tests were conducted on TSSA and MFMS scores to compare social and emotional differences post the 4-week camp. Narrative field notes were documented after each of the eight yoga sessions. Results: A significant improvement from pre- to post-test was found in overall TSSA (t(4) = −5.744, P = 0.005) and on respondent to initiation (t(4) = −3.726, P = 0.020), initiating interaction (t(4) = −8.5, P = 0.039), and affective understanding and perspective taking subscales (t(4) = −5.171 P = 0.007). Youth’s MFMS scores increased from 80% to 100% at the end of eight yoga sessions demonstrating a pleasant or positive mood. Thematic analysis of the narrative notes identified three key factors associated with the yoga experience: (a) enhanced mood and emotional expression, (b) increased empathy toward others, and (c) improved teamwork skills. Conclusion: This multimodal Mandala yoga training has implication for developing positive social and emotional skills for youth with ASD.