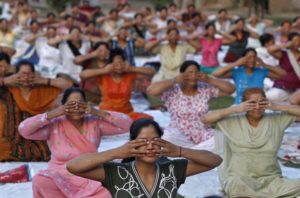 “It is well known that regular practice of yoga can help reduce levels of stress, enhance mobility, lower blood pressure and improve overall wellbeing. It is these benefits that many health experts believe can improve diabetes management and protect against other related medical conditions such as heart disease.” – Diabetes UK

Diabetes is a major health issue. It is estimated that 30 million people in the United States and nearly 600 million people worldwide have diabetes and the numbers are growing. Type II Diabetes results from a resistance of tissues, especially fat tissues, to the ability of insulin to promote the uptake of glucose from the blood. As a result, blood sugar levels rise producing hyperglycemia. Diabetes is the 7th leading cause of death in the United States. In addition, diabetes is heavily associated with other diseases such as cardiovascular disease, heart attacks, stroke, blindness, kidney disease, and circulatory problems leading to amputations. As a result, diabetes doubles the risk of death of any cause compared to individuals of the same age without diabetes.

In today’s Research News article “Effect of 12 Weeks of Yoga Therapy on Quality of Life and Indian Diabetes Risk Score in Normotensive Indian Young Adult Prediabetics and Diabetics: Randomized Control Trial.” (See summary below or view the full text of the study at: https://www.ncbi.nlm.nih.gov/pmc/articles/PMC5713721/ ), Keerthi and colleagues recruited adult participants with diabetes, pre-diabetes, and healthy non-diabetics. All participants continued their normal therapy throughout the study while half the diabetics and pre-diabetics were randomly assigned to receive either 12 weeks of additional walking or yoga therapy for 45 minutes, three time per week. All participants were measured before and after the 12-week treatment period for fasting glucose, insulin, and insulin resistance, body size, blood pressure, diabetes risk, and quality of life.

They found that both the diabetic and pre-diabetic groups showed significant reductions after yoga therapy training in fasting glucose, insulin, and insulin resistance, and diabetes risk, and significant increases in quality of life. Hence, 12 weeks of yoga therapy improved both the metabolic and psychological state of both pre-diabetic and overtly diabetic individuals. These findings were in comparison to normal healthy participants and to pre-diabetic and diabetic groups who walked for a comparable period of time to the yoga therapy. This makes it unlikely that simply exercise was responsible for the observed group differences. Rather, the improvements were specifically due to participation in yoga. Future research needs to follow up to determine if the improvements are lasting.

These are encouraging results. Diabetes is epidemic worldwide and safe and effective additional treatments are greatly needed. The present study demonstrates that yoga therapy can help to prevent diabetes by improving the physical and mental states of individuals at high risk for diabetes. They also show that yoga practice can produce improvements in addition to standard therapy in overtly diabetic individuals. This suggests that yoga practice should be included in the standard treatment regimens for pre-diabetic and diabetic adults.

So, improve diabetes and diabetes risk with yoga.

“For those looking for how to prevent diabetes or gain relief from the disease, adopting a healthy lifestyle that incorporates yoga postures for diabetes can offer patients with the condition of its pre-indicators a new lease on life.” – Yoga U

India has become the epicentre for diabetes, a stress-related disorder affecting the working skills and day-to-day lifestyle management of younger population. Most of the studies have reported the effect of yoga on improving Quality of Life (QoL) in diabetic patients with other comorbidities. Till date, no randomized control trial reports are available to show the effect of yoga therapy on QoL and Indian Diabetes Risk Score (IDRS) in normotensive prediabetic and diabetic young individuals.

To determine the effect of 12 weeks of yoga therapy on QoL and IDRS among normotensive prediabetic and diabetic young Indian adults.