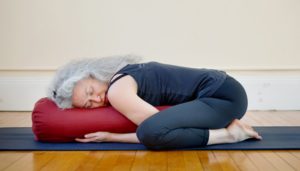 “If you are suffering from fibromyalgia, it can be hard to get yourself moving, but movement and exercise are key ways to help manage and minimize pain. Practicing yoga daily can help. Yoga targets not only the body but also the mind. You can access multiple benefits by using yoga for fibromyalgia pain.” – Pain Doctor

Fibromyalgia is a mysterious disorder whose causes are unknown. It is very common affecting over 5 million people in the U.S., about 2% of the population with about 7 times more women affected than men. It is characterized by widespread pain, abnormal pain processing, sleep disturbance, and fatigue that lead to psychological distress. Fibromyalgia may also produce morning stiffness, tingling or numbness in hands and feet, headaches, including migraines, irritable bowel syndrome, sleep disturbances, thinking and memory problems, and painful menstrual periods. The symptoms are so severe and debilitating that about half the patients are unable to perform routine daily functions and about a third have to stop work. Although it is not itself fatal, suicide rates are higher in fibromyalgia sufferers.

There are no completely effective treatments for fibromyalgia. Symptoms are generally treated with pain relievers, antidepressant drugs and exercise. But, these only reduce the severity of the symptoms and do not treat the disease directly. Mindfulness practices have also been shown to be effective in reducing pain from fibromyalgia. Yoga is both an exercise and a mindfulness practice. So, it would make sense to investigate the effectiveness of yoga practice in treating fibromyalgia.

In today’s Research News article “A pilot randomized controlled trial of the Yoga of Awareness program in the management of fibromyalgia.” See summary below or view the full text of the study at: https://www.ncbi.nlm.nih.gov/pmc/articles/PMC5568071/, Carson and colleagues recruited adult women who were diagnosed with fibromyalgia for at least a year. They were randomly assigned to receive either yoga practice or be on a wait-list control condition. The Yoga for Awareness training occurred in a group setting for 2 hours, once a week for 8 weeks. Participants were also encouraged to practice at home for 20-40 minutes, 5 to 7 days per week. Yoga for Awareness sessions consisted of yoga stretching poses, mindfulness meditation, breathing exercises, presentations on the application of yogic principles to optimal coping, and group discussions. Participants were measured before and after training for fibromyalgia symptoms and disability, including myalgic tender points, strength deficits, and balance deficits, and pain coping including acceptance, catastrophizing, and adaptive and maladaptive strategies. In addition, daily diaries were maintained of “pain, fatigue, emotional distress, and vigor, along with success at coping via acceptance and relaxation strategies.”

They found that, in comparison to baseline and the wait-list condition, yoga practice produced significant improvements in overall fibromyalgia symptoms and its impact, including pain, fatigue, stiffness, sleep problems, depression, anxiety, memory problems, tenderness, balance, environmental sensitivity, and strength. There were even improvements in the strategies that the patients used to cope with the pain, including increased engagement with the pain, pain problem solving, reappraisal and decreased pain catastrophizing, self-isolation, and disengagement. The daily diaries also revealed significant improvements as a result of yoga practice including reduced pain, fatigue, emotional distress and increased vigor, relaxation, and success with acceptance. The improvements were significantly related to the amount of home practice with the greater the number of days per week that yoga was practiced at home the greater the improvements in overall fibromyalgia symptoms.

These results represent highly clinically significant improvements in fibromyalgia produced by just 8 weeks of yoga practice. The observed improvements were broad, covering a wide range of symptoms, and impactful, with relatively large improvements. These are exciting results as fibromyalgia produces great suffering and impairment in the lives of the patients. Yoga practice is generally safe and acceptable to the patients and appears to be very effective. Further research is needed especially research including males and an active control, such as another aerobic exercise. But, the results are so promising that they suggest that yoga practice should be included in the standard treatment package for fibromyalgia.

So, improve fibromyalgia with yoga practice.

“Although yoga has been practiced for millennia, only recently have researchers begun to demonstrate yoga’s effects on persons suffering from persistent pain. The Yoga of Awareness program stands in contrast to previous multimodal interventions with [fibromyalgia] patients in that it integrates a wide spectrum of yoga-based techniques — postures, mindfulness meditation, breathing exercises, application of yogic principles to optimal coping, and group discussions.” – James Carson

A mounting body of literature recommends that treatment for fibromyalgia (FM) encompass medications, exercise and improvement of coping skills. However, there is a significant gap in determining an effective counterpart to pharmacotherapy that incorporates both exercise and coping. The aim of this randomized controlled trial was to evaluate the effects of a comprehensive yoga intervention on FM symptoms and coping. A sample of 53 female FM patients were randomized to the 8-week Yoga of Awareness program (gentle poses, meditation, breathing exercises, yoga-based coping instructions, group discussions) or to wait-listed standard care. Data were analyzed by intention to treat. At post-treatment, women assigned to the yoga program showed significantly greater improvements on standardized measures of FM symptoms and functioning, including pain, fatigue, and mood, and in pain catastrophizing, acceptance, and other coping strategies. This pilot study provides promising support for the potential benefits of a yoga program for women with FM.