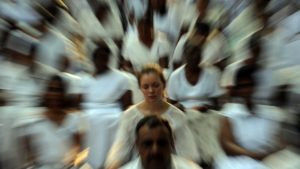 “While the benefits of mediation are being recorded in scientific journals, what’s not discussed as often are the negative meditation side effects. It can be a frustrating, sometimes agonizing process that will bring you into contact with your limitations and inner conflicts. Rather than a metamorphosis, you can experience a setback.” – Linda Kaban

People begin meditation with the misconception that meditation will help them escape from their problems. Nothing could be further from the truth. In fact, meditation does the exact opposite, forcing the meditator to confront their issues. In meditation, the practitioner tries to quiet the mind. But, in that relaxed quiet state, powerful, highly emotionally charged thoughts and memories are likely to emerge. The strength here is that meditation is a wonderful occasion to begin to deal with these issues. But, often the thoughts or memories are overwhelming. At times, professional therapeutic intervention may be needed.

Meditation practice can also produce some troubling experiences beyond unmasking deep psychological issues. Not the least of these experiences are awakening experiences themselves. If they are not properly understood, they can lead to sometimes devastating consequences. These experiences are so powerful and unusual that they can be misinterpreted. Awakening experiences have been misdiagnosed as psychotic breaks and the individual placed on powerful drugs and/or institutionalized. At the very least, the individual may believe that they are losing their sanity or as one has said, “I just got used to the idea that occasionally I would have just one of those days.”

Meditation practice can sometimes produce energetic states that can vary in intensity, location, and duration. If and when these occur, they are usually quite surprising and unexpected. They can be readily misinterpreted. They involve energy focused in specific parts of the body or overall. They can feel like nervousness, tension, or almost like electrical currents flowing through the body and can produce spontaneous and undirected movements. These energy states are usually found to be aversive and difficult to cope with.

Many practitioners never experience these issues or only experience very mild states. There are, however, no systematic studies of the extent of this problem. In today’s Research News article “Unwanted effects: Is there a negative side of meditation? A multicentre survey.” See summary below or view the full text of the study at: https://www.ncbi.nlm.nih.gov/pmc/articles/PMC5584749/, Cebolla and colleagues conducted an on-line survey of meditation practitioners that engaged in a variety of different meditation techniques. They were asked if they had experienced any unwanted experiences. If they had, they were asked to describe the nature of these experiences. These incidents were categorized into 8 clusters; anxiety symptoms (including panic attacks), pain (stomach, headache, muscular, nausea), depersonalization and derealization, hypomania or depressive symptoms, emotional lability, visual focalization problems, loss of consciousness or dizziness, and other symptoms. They also completed a checklist of unwanted experiences.

They found that the incidence of negative events was quite high with 25.4% of the respondents reporting unwanted experiences. But most reported that the experiences were mild and transitory and most did not lead to the need for medical assistance or the cessation of meditation practice. These unwanted experiences occurred more frequently with individual rather than group practice and with focused meditation practice, particularly when practices was longer then 20 minutes. The most frequently described reactions were anxiety symptoms (including panic attacks) and depersonalization or derealization (“when I began to focus on my breath, a shift seemed to occur in my spatial awareness quite quickly. I felt like my awareness was becoming very close to me, and everything around me was becoming very distant.)

The results suggest that unwanted (negative) experiences are quite common with meditators, but for the most part are short-lived and mild. It should be kept in mind, however, that practitioners who had more severe and long lasting negative experience may well not continue meditation and not be included in the sample. So, the actual frequency and severity of unwanted (negative) experiences may actually be higher. There was also no comparison condition. It is possible that similar unwanted experiences occur over time in people who do not meditate.

The results suggest that better instruction is needed for beginning meditators regarding the types of experiences that meditators may have and resources provided for dealing with these experiences. In the West meditation has been promoted as a completely positive and beneficial practice. For the most part, it is. But, it can have significant, unpleasant, and potentially harmful consequences. It is important that practitioners be aware of this and have access to experienced teachers who can help them navigate through the difficulties if they appear.

It needs to be publicized that meditation can produce uncomfortable effects.

“To put things in perspective, many millions of people have meditated, over the past several thousands of years, and written about it extensively – there is a vast literature. If you look at this history as a vast trial run of a new drug, there are remarkably few negative side effects for such a powerful process.” – Lorin Roche

Despite the long-term use and evidence-based efficacy of meditation and mindfulness-based interventions, there is still a lack of data about the possible unwanted effects (UEs) of these practices. The aim of this study was to evaluate the occurrence of UEs among meditation practitioners, considering moderating factors such as the type, frequency, and lifetime duration of the meditation practices.

An online survey was developed and disseminated through several websites, such as Spanish-, English- and Portuguese-language scientific research portals related to mindfulness and meditation. After excluding people who did not answer the survey correctly or completely and those who had less than two months of meditation experience, a total of 342 people participated in the study. However, only 87 reported information about UEs.

The majority of the practitioners were women from Spain who were married and had a University education level. Practices were more frequently informal, performed on a daily basis, and followed by focused attention (FA). Among the participants, 25.4% reported UEs, showing that severity varies considerably. The information requested indicated that most of the UEs were transitory and did not lead to discontinuing meditation practice or the need for medical assistance. They were more frequently reported in relation to individual practice, during focused attention meditation, and when practising for more than 20 minutes and alone. The practice of body awareness was associated with UEs to a lesser extent, whereas focused attention was associated more with UEs.

This is the first large-scale, multi-cultural study on the UEs of meditation. Despite its limitations, this study suggests that UEs are prevalent and transitory and should be further studied. We recommend the use of standardized questionnaires to assess the UEs of meditation practices.