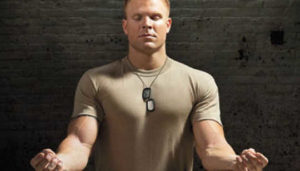 “Regular mindfulness practice can lead to a greater present-centered awareness and nonjudgmental acceptance of potentially distressing cognitive and emotional states as well as trauma-related internal and external triggers. Awareness and acceptance of trauma-related thoughts and feelings may . . . be especially useful for individuals with PTSD, as it may help decrease experiential avoidance, reduce arousal, and foster emotion regulation.” – National Center for PTSD

Obviously, these are troubling symptoms that need to be addressed. There are a number of therapies that have been developed to treat PTSD. One of which, mindfulness meditation training has been found to be particularly effective. But meditation is actually a complex practice involving many different components. One such simple non-meditative component is relaxation and slowed breathing. In addition, there are many different meditation techniques. As a result, it is difficult to know what types of meditation are most effective. It is also difficult to specify if meditation per se or the relaxation and slow breathing that occurs with meditation may be responsible for meditation effects.

In today’s Research News article “Mechanistic pathways of mindfulness meditation in combat veterans with posttraumatic stress disorder.” See summary below or view the full text of the study at: https://www.ncbi.nlm.nih.gov/pmc/articles/PMC4803530/, Wahbeh and colleagues investigate different components of meditation and the route of their effectiveness, psychological or physical. They recruited combat veterans who had an established diagnosis of posttraumatic stress disorder (PTSD) and randomly allocated each to one of four conditions; body scan mindfulness meditation, slow breathing with a biofeedback device, mindful awareness of the breath with an intention to slow the breath, or 4) sitting quietly. They were trained once a week for 6 weeks and were assigned to practice 20 minutes per day between sessions. The participants were measured before and after training for mindfulness, PTSD symptoms, lifetime trauma, combat experience, perceived symptom improvement, intrusive thoughts, perceived stress, depression, positive and negative emotions, self-efficacy, sleep quality, and attentional ability. They also received physical measures with electroencephalogram (EEG), salivary cortisol, heart and respiration rates.

They found after training that the 2 mindfulness meditation conditions produced significantly greater mindfulness, perceived symptom improvement, the greatest improvements in PTSD symptoms, and greater reductions in respiration rates. Hence, the inclusion of meditation was critical for symptomatic improvement. But, the improvements were all psychological. In general, there were no differences in physiological measures, except for slowed breathing in meditation.

The study’s strength was that it separated components of meditation practice and identified the effective components. Mindfulness meditation appears to improve the psychological symptoms of posttraumatic stress disorder (PTSD). It appeared to do so, independent of relaxation and physiological changes. So, physical relaxation or physiological changes are not sufficient. The study suggests that the inclusion of meditation practice is mandatory in order to treat PTSD. Since meditation is known to improve emotion regulation and attention, reduce stress responding, and reduce worry and rumination, the study suggests that these psychological effects of meditation are crucial to symptom relief for PTSD sufferers.

“But new research has now demonstrated that mindfulness—a non-judgmental awareness of our thoughts and feelings—might be a useful tool for veterans battling PTSD. Rather than being stuck in disturbing memories and negative thoughts, they can use mindfulness to actively shift their attention out of ruminations and produce lasting changes in the brain.” – Adam Hoffman

This study’s objective was to evaluate the effect of two common components of meditation (mindfulness and slow breathing) on potential mechanistic pathways.

Meditation participants had significant but modest within-group improvement in PTSD and related symptoms although there were no between-group effects. Perceived impression of PTSD symptom improvement was greater in the meditation arms compared to controls. Resting respiration decreased in the meditation arms compared to SQ. For the mechanistic pathways 1) Subjective hyperarousal symptoms improved within-group (but not between-group) for MM, MM+SB, and SQ while HR and HRV did not; 2) Intrusive thoughts decreased in MM compared to MM+SB and SB while the ANT measures did not change; and 3) MM had lower awakening cortisol within-group but not between-group.

Treatment effects were mostly specific to self-report rather than physiological measures. Continued research is needed to further evaluate mindfulness meditation’s mechanism in people with PTSD.